Space Coast Credit Union is pleased to announce the promotion of several individuals. 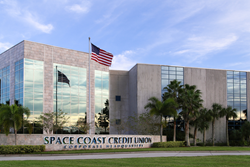 I am excited about these promotions because of what they represent to what we are trying to do as an organization.

Space Coast Credit Union is pleased to announce the promotion of several individuals.

“I am excited about these promotions because of what they represent to what we are trying to do as an organization,” said President and CEO Doug Samuels. “What we want to do is attract excellent, smart people who possess the core values; provide them excellent leadership – and enable them to build their careers through their own preparation, achievement and work under the guidance of inspiring leaders.”

Richard joined SCCU as Vice President of Marketing in November 2012, bringing over 20 years of marketing experience to the credit union where she has been responsible for overseeing the credit union’s marketing and public relations efforts.

In addition to leading a successful redesign of the credit union’s website in 2013, Richard has continually worked to develop and grow SCCU’s Members’ Watchdog brand, expanding the credit union’s image of financial protection and increasing brand awareness throughout its markets, spanning Flagler to Miami-Dade County.

In addition to overseeing and directing financial operations, Eisbrenner will also work closely with the credit union’s leadership on an executive management team to advance the credit union’s mission of creating value in cooperative ownership and protect members’ financial interests.

In addition to driving the implementation of SCCU’s first mobile platform, DeRoy led the successful conversion of the credit union’s online banking systems in 2015, drastically improving the way members access and monitor their accounts on a daily basis.

Domingue began his career at SCCU in November of 2007 as Branch Supervisor and has served in several roles over the years, including Branch Manager, Operations Services Manager, Loan Servicing Manager and – most recently – Director of Loan Servicing and Processing.

Instrumental in the implementation of its ExpressSign process for loans which allows members to sign their loan documents online at any time, from anywhere, Domingue will continue to oversee the loan processing and servicing departments, and has added the collections area in his new role.

Joining SCCU with six years of credit union experience in 2007 as an Express Sales Associate, Prager quickly became a top producer and was promoted to Express Sales Manager before being promoted again to Director of Consumer Sales in June 2013.

In his new role, Prager will continue to be responsible for all of Express Sales and Indirect Sales, representing over $1 billion in consumer loans and mortgage production, as well as the origination of all new memberships and deposit accounts.

Originally hired as Manager of the Pembroke Pines branch in 1998, Matthews was promoted to Regional Sales Manager in 2000 and grew the branch network in Broward County from four initial locations to the twelve branches present today.

Nicole began her career with the SCCU in June 2013 as Manager of Systems Operation & Development and has provided systems development and technical support for many major projects including the credit union’s Member Rewards program, Online Banking conversion and recent core conversion.

About SCCU
Space Coast Credit Union was chartered in 1951 and is headquartered in Melbourne, Florida. The credit union serves more than 330,000 members with assets of over $3.7 billion through a network of 58 branches and over 100 ATMs located throughout Florida and through its website SCCU.com. Space Coast Credit Union is open for membership to anyone who lives or works in the fourteen Florida counties it serves. Visit SCCU.com/Careers to learn more about what SCCU has to offer and view a list of current job openings in each department.