Eco-friendly Bioscarf can Help Combat Air Pollution Around the World

For every Bioscarf sold, Petrichor SA, LLC. donates one Bioscarf to a person at-risk 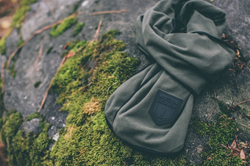 The Bioscarf is the first scarf in the world to have a N95 filter.

“It’s time to not only raise awareness about this issue but to more importantly give many of the people at risk who don’t have the means to protect themselves something to help them combat air pollution on a daily basis," co-founder Hazel Solle says.

The Bioscarf is a new scarf with a patent pending design that incorporates a particulate filter into the fabric. Whether one is out for a bike ride, on a bus or plane, or just out on the street, the Bioscarf gives its user comfort and protection wherever, and whenever, it is needed.

When properly fitted, the Bioscarf protects individuals from many of the common airborne contaminants associated with air pollution around the world. It has an an N95 rating, which means that when fitted correctly, it is capable of blocking non-oil based airborne particles 3.0 microns in size or larger.

"I was looking for a way to protect myself on the road without having to wear one of those masks. I mentioned it to my wife. She came up with the idea and brought it to life,” co-founder Carlton Solle said.

The Bioscarf can be ordered in a variety of colors and was designed to withstand the elements. Its lining is made from 100% post-consumer recycled PET water bottles and its signature labels are made out of recycled PVC. Despite being made out of very eco-friendly materials, the Bioscarf is extremely soft and very warm. In addition, it is both fashionable and functional.

"UNICEF just reported that over 2 billion kids around the world are breathing toxic air and nobody is talking about it,” co-founder Hazel Solle said. “It’s time to not only raise awareness about this issue but to more importantly give many of the people at risk who don’t have the means to protect themselves something to help them combat air pollution on a daily basis.”

Under its PlusOne program, Bioscarf pledges to donate one Bioscarf to an individual at risk for every Bioscarf sold. The company already has earmarked part of its initial production run for the water warriors at Standing Rock, as well as victims of the forest fires which are presently raging in the southern part of the United States of America.

Today, Bioscarf launched its new website, where customers can learn everything there is to know about the new product. The website shows where all scarves are being donated and allows interested consumers to purchase a scarf just in time for the holidays.

The photos featured the Bioscarf website were taken by photographer Jessica Ashley - whose work has been featured in Southern Living and The Atlantan - and were shot in Serenbe, a pioneering new community model connected to nature south of Atlanta.

The Bioscarf is both functional and stylish.

The Bioscarf can filter 95% of airborne contaminants.

The Bioscarf offers users comfort and protection whenever - and whenever - it's needed.

For every Bioscarf sold, one is donated to an at-risk individual.