The Pennsylvania Athletic Trainers’ Society (PATS), along with various other healthcare organizations, joined together to take part in World Diabetes Day at the State Capitol Rotunda in Harrisburg. The event provided representatives from PATS with a great opportunity to educate attendees about the athletic trainers’ role in the screening and care of diabetes in the physically active population. 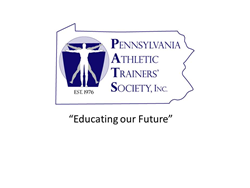 The Pennsylvania Athletic Trainers’ Society (PATS) continues to be a presence in Harrisburg. PATS recently joined forces with other healthcare organizations to promote diabetes education at the World Diabetes Day observance. The event, held at the State Capitol Rotunda in Harrisburg, featured a variety of speakers from around the Commonwealth of Pennsylvania. Speakers included Dr. Renu Joshi (Pinnacle Health), various local chefs, state representatives, and the keynote speaker, former Pittsburgh Steeler Kendall Simmons. Representative Donna Oberlander presented House Resolution 1072, that was signed by Governor Tom Wolf, naming November 14th, 2016 as the official World Diabetes Day in the Commonwealth of Pennsylvania. This year’s theme was “Eyes on Diabetes” and the importance of screening.

Pennsylvania Secretary of Health Dr. Karen Murphy stated “diabetes is one of the most common chronic illnesses in the state of Pennsylvania, affecting about one in ten people.” She then went on to explain why “proper screening and talking to your physician are vital to increasing you chances of staying healthy and avoiding the dangerous health consequences of the disease.” Diabetes is a chronic disease that can occur in two forms. Type 1 diabetes occurs when the pancreas does not produce enough insulin. Type 2 diabetes occurs as a result of the body not using insulin properly.

Representatives from PATS, as well as athletic training students from Alvernia University, used the opportunity at the Capitol to discuss the athletic trainers’ role in the care and screening of diabetes. Athletic trainers (ATs) are often the most readily available healthcare providers in the athletic setting on a daily basis. ATs are trained to recognize and provide necessary care to those athletes affected by diabetes. ATs also play a pivotal role in the screening process during an athlete’s pre-participation examination and assist the diagnosed athlete with the daily maintenance of the disease.

One athlete that received care on a regular basis was the day’s keynote speaker and two-time Super Bowl Champion Pittsburgh Steeler, Kendall Simmons. Mr. Simmons spoke about how he managed the disease during his tenure in the NFL. In 2003, Simmons’ second year in the NFL, just before training camp, he started experiencing symptoms that made him feel uneasy on the field: blurry vision, weakness, extreme thirst. Simmons was diagnosed with type 1 diabetes. Kendall Simmons is a big supporter of athletic trainers. He briefly spoke about the role the Pittsburgh Steelers Athletic Training Staff played in the management of his disease. Simmons stated that he would check his blood glucose numbers on a regular basis with a monitoring unit in the locker room, and then again with another unit in the athletic training room. On game days, Simmons stated that during various TV timeouts or a stoppage in the game, there was constantly an athletic trainer checking his glucose levels and overseeing the approximately 8-10 shots per game. He expressed the importance of listening to his body.

An estimated 86 million adults in the United States have pre-diabetes, placing them at risk for developing the disease. The most common symptoms associated with diabetes may include increased urination frequency, thirst, and hunger. Other symptoms reported may include extreme fatigue, irritability, blurred vision, and cuts and bruises that are slow to heal. Because roughly 90 percent of people with pre-diabetes are not aware they have it, regular health screenings are important to prevent the onset of diabetes.

The Pennsylvania Athletic Trainers’ Society, Inc. is a progressive organization of licensed healthcare professionals who work under the direction of a licensed physician. Our society continues to increase public awareness and education regarding Athletic Trainers and the Athletic Training profession while serving as the premier source of information for public safety, injury and illness prevention, early intervention, patient care, and healthcare delivery for the physically active in the Commonwealth.

“The Keystone to a Healthy and Physically Active Life”