On December 10, 2016, at The American Foundation of Savoy Orders’ 19th Annual Benefit Gala, “Ballo di Savoia” (Savoy Ball) in New York City, guests of honor - HRH Prince Emmanuel Philibert of Savoy, HRH Prince Dimitri of Yugoslavia and Azaea Beatrice Reyna di Savoia - together with 300 patrons, benefactors and guests, raised funds for victims of Italian earthquakes and the Haiti hurricane. The Ball was part of a four day weekend of events organized by the American Delegation of Savoy Orders and the Savoy Foundation, continuing the spirit and tradition of charitable giving and hospitaller care of the historic thousand year dynastic orders of knighthood and merit of the Royal House of Savoy. 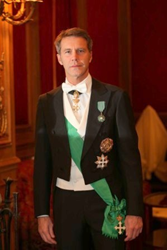 The Ballo di Savoia, the principal fund-raising event of the Savoy Foundation, provides important charitable grants to be distributed in the medical, educational and humanitarian assistance fields”, states Marco Grassi, President of the Foundation.

His Royal Highness Prince Emmanuel Philibert of Savoy, Prince of Venice, and his cousins H.R.H. Prince Dimitri of Yugoslavia and Azaea Beatrice Reyna di Savoia, were guests of honor at the American Foundation of Savoy Orders annual charity event, the Savoy Ball (Ballo di Savoia). The gala benefit was held at the Metropolitan Club in New York City on Saturday evening, December 10, 2016. The Ball was part of a four day weekend of events organized by the American Delegation of Savoy Orders and the Savoy Foundation, continuing the spirit and tradition of charitable giving and hospitaller care of the historic thousand year dynastic orders of knighthood and merit of the Royal House of Savoy http://www.ordinidinasticicasasavoia.it/. The benefit gala attracted over 300 participants that raised funds for the victims of the recent earthquakes and hurricane in Italy and Haiti.

The 19th annual Savoy Ball of New York (Ballo di Savoia) at the Metropolitan Club was a much anticipated white-tie event. The gala soirée was hosted by the American Foundation of Savoy Orders, Incorporated http://www.savoyfoundation-usa.org/ and was under the patronage of Their Royal Highnesses Prince Victor Emmanuel and Princess Marina of Savoy. Their son HRH Prince Emmanuel Philibert of Savoy is also a grandson of the last King of Italy, Umberto II. He is the son and heir of Prince Victor Emmanuel, the Grand Master of the Dynastic Orders of the Royal House of Savoy. Prince Dimitri of Yugoslavia is the son of Prince Alexander of Yugoslavia and his first wife, Princess Maria Pia of Savoy, the eldest daughter of King Umberto II of Italy. Azaea Beatrice Reyna di Savoia is the daughter of Princess Maria Beatrice of Savoy, the youngest daughter of Italy's last King, Umberto II, and his wife, Queen Marie José.

The Savoy Foundation is supported by 200 knights and dames in the United States and Canada who are members of the American Delegation of Savoy Orders http://www.savoydelegation-usa.org/ which is part of the historic thousand year dynastic and chivalric Orders of the Royal House of Savoy, which united Italy as a kingdom between 1861 and 1871. The Savoy Foundation, whose mission is to serve “the poor and the sick,” raises funds for humanitarian projects. The ball benefited the Savoy Foundation’s disaster relief fund.

Funds raised at the Gala enables the Savoy Foundation to continue its support of humanitarian projects, including children's causes, veterans programs, disaster relief for earthquake and flood victims and scholarships for college students. “This year’s much-anticipated edition of the Ballo di Savoia did not disappoint: a record number of guests enjoyed a festive and elegant evening, this being the principal fund-raising event of the American Foundation of Savoy Orders; a success that will allow important charitable grants to be distributed in the medical, educational and humanitarian assistance fields,” stated Marco Grassi, President of the Foundation.

Joseph Sciame, Foundation Vice-President and 2016 Ball Chairman, remarked: “As one looked out to the overwhelming crowd of guests in the beautiful and festive Metropolitan Club ballroom, all one could see were very proud members and friends of our Orders of Savoy. In this special holiday season, it was a great honor and privilege for us all to be in the presence of HRH Prince Emmanuel Philibert and his cousins. Indeed, it was a Gala Ball!”

The gilded age Metropolitan Club was a resplendent venue for the glittering gala reminiscent of courtly European balls of the past. The dignitaries and guests, impressive in white tie and tails with orders and decorations worn by the gentlemen and ball gowns by the ladies, descended the Club’s grand marble double staircase, after a sparkling champagne reception, to the main ballroom accompanied by an orchestra playing the stately “Marche Reale” (Royal March), the national anthem of Italy when it was a monarchy under the House of Savoy from 1861 to 1946. The Savoy Ball cocktail hour with hors d'oeuvres was followed by a 3 course sit-down dinner, the Mitch Kahn Dance Orchestra and a sumptuous post dinner Viennese dessert table.

Next year’s Savoy Ball is scheduled for December 9, 2017 at the Metropolitan Club will celebrate a milestone 25th anniversary of the founding of the Savoy Foundation.

Ballo Vice-Chair and Grand Patron Frank J. Desiderio, Esq. (Standing Center) and Mrs. Frank Desiderio to his right with guests at his table

Ball Table of Mira Zivkovich and Raymond Lavoie with guests