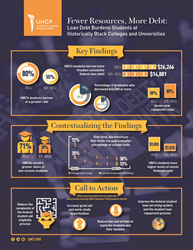 "Recently, some analysts have questioned whether the student debt crisis is real. For HBCU students, who increasingly are on the hook for financing college costs, the crisis is ever so real,” Cheryl L. Smith, UNCF SVP of Public Policy & Government Affairs

“Student loans have become one of the primary ways students pay for college, but for students at HBCUs—many of whom are first-generation college students or who disproportionately come from low-income families and have less access to financial resources—the reliance on student loans is far greater,” said Dr. Brian K. Bridges, who leads UNCF’s FDPRI.

“When placed into the broader context of the types of students served at HBCUs, the findings of this report help us to better understand the factors that impact HBCU students’ need to borrow and their challenges repaying their loans,” said Bridges. “These factors include racial wealth gaps, declining investments in higher education, unmet financial need, limited institutional resources, and other economic barriers often experienced by African American students and their families. Despite these challenges, HBCUs continue to be a ‘best buy’ in higher education by offering comparably lower-cost tuition and disproportionately producing African American college graduates. UNCF awards $100 million each year in need-based student scholarships to address the financial obstacles that HBCU students confront. We are doing our part. Now, the country must invest so that HBCU students can earn their degrees with more resources and less debt.”

“Recently, some analysts have questioned whether the student debt crisis is real. For HBCU students, who increasingly are on the hook for financing college costs, the crisis is ever so real,” said Smith. “This report documents the crisis and suggests four policy areas that are ripe for reform to reduce the heavy debt burden faced by HBCU students. Congress and the next administration have an opportunity with the renewal of the Higher Education Act to lessen the financial load.”

The report issues four broad recommendations for policy makers:
1.    Reduce the complexity of the federal student aid eligibility process to reach more low-income students and provide more grant aid for those with need.
2.    Reduce the need for low-income students to borrow loans by increasing grant aid and work-study opportunities.
3.    Make federal loans less costly for students and their families.
4.    Ensure that the federal student loan servicing system serves students well and that the student loan repayment process is manageable, effective and efficient.

About UNCF
UNCF (United Negro College Fund) is the nation's largest and most effective minority education organization. To serve youth, the community and the nation, UNCF supports students' education and development through scholarships and other programs, strengthens its 37 member colleges and universities, and advocates for the importance of minority education and college readiness. UNCF institutions and other historically black colleges and universities are highly effective, awarding 20 percent of African American baccalaureate degrees. UNCF annually awards $100 million in scholarships and administers more than 400 programs, including scholarship, internship and fellowship, mentoring, summer enrichment, and curriculum and faculty development programs. Today, UNCF supports more than 60,000 students at more than 1,100 colleges and universities across the country. Its logo features the UNCF torch of leadership in education and its widely recognized trademark, "A mind is a terrible thing to waste.”® Learn more at UNCF.org, or for continuous news and updates, follow UNCF on Twitter, @UNCF and #HBCUDebt.