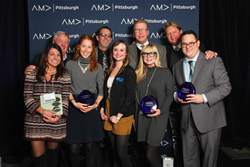 “It’s always great to be selected for an award by our local peers. But to earn the Grand Marketer of the Year Award is even more rewarding and is physical evidence of the excellent work being done by our agency to help our client win this award.”

Pipitone Group, a local integrated marketing firm, was honored by the Pittsburgh chapter of the American Marketing Association (AMA) as its 2016 Grand Marketer of the Year at its annual awards luncheon on Dec. 8.

Western Pennsylvania’s premier, results-based marketing awards, the 10th annual AMA Marketer of the Year event at the LeMont Restaurant recognized the region’s top marketers from both brands and agencies for their creative work. Entries were independently scored by a panel of judges from AMA chapters in Pittsburgh, Columbus and Cincinnati.

Earning a competition-best four Marketer of the Year Awards, Pipitone Group received top honors for its work on Kraft Heinz’s recent pickle product launch, where Pipitone Group promoted Kraft Heinz’s first new pickle flavors in over 50 years. Leveraging the timing of the presidential election, Spicy Garlic Pickles were positioned against Sweet & Spicy Pickles in a memorable campaign that launched at the Picklesburgh event in July.

“It’s always great to be selected for an award by our local peers,” said Pipitone Group President and CEO Scott Pipitone. “But to earn the Grand Marketer of the Year Award is even more rewarding and is physical evidence of the excellent work being done by our agency to help our client win this award.”

Pipitone Group earned Marketer of the Year honors in the Medical and Healthcare Marketing category for its work in launching Butler Health System’s “Remarkable BHS” campaign.

Additionally, Pipitone Group received the Marketer of the Year distinction in the Service Provider (Self-Promotion) category for its “Build Your Archetypes” direct mailer, where Pipitone Group utilized small Mr. Potato Head figurines within a direct mail piece targeted at architectural building product manufacturers to generate client leads and build relationships within the industry. The figurines were strategically used to promote a workshop to help “build” a client’s archetype.

These distinctions mark the second time this month that all three of these campaigns have been recognized, as each received national honors through the Davey Awards, while Pipitone Group’s work with Butler Health System also earned an IABC Golden Triangle Award in October for audiovisual communication. In total, after taking home four honors at the AMA Marketer of the Year Awards, Pipitone Group has compiled 26 awards in 2016.

About Pipitone Group
Pipitone Group is an award-winning, Pittsburgh-based integrated marketing and communications firm. Known for its collaborative, “inteGREAT” approach, Pipitone Group for over 20 years has produced strategic, creative marketing campaigns for clients in industries such as commercial building products, education, nonprofit, technology services and health care. Founded in 1992, Pipitone Group has grown into one of the region’s most dynamic mid-sized agencies. Learn more at http://www.pipitonegroup.com.

About American Marketing Association Pittsburgh
AMA Pittsburgh is the largest professional marketing association in western Pennsylvania, with more than 300 members and supporting an additional 2,500 professionals who attend events and utilize AMA services.