WorldReligionNews.com Holiday Infographic: 'What Do Religions Do During the Holiday Season?' 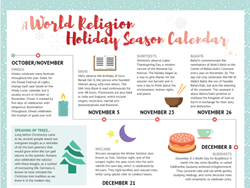 WorldReligionNews.com, an award-winning religion news site picked as the "2016 #1 Religious Blog" by FeedSpot, has updated their exclusive and annual holiday season-inspired infographic that informs how 24 major world religions observe the holiday season.

Various religious festivities and special days are featured in a timeline from November to January, including but not limited to the Diwali Festival of Lights, Winter Solstice, Bodhi Day and Hanukkah.

In between information tidbits are “Did You Know” images, which provides insights to holiday trivia, answering questions such as, how did the Christmas tree tradition start? Who was the real Santa Claus? Who invented Christmas lights? Which U.S. state was first to recognize December 25th as a holiday?

The WorldReligionNews.com holiday infographic features a rich set of information that has been selectively condensed from authoritative references.

The infographic and embed code are available here: http://www.worldreligionnews.com/culture/winter-religious-holidays-around-world

WRN covers the news generated by all major world religions, A to Z, from Agnosticism to Wicca and in between, in a moderate tone with positioning that strives to inspire, enlighten, entertain and engage within a framework wired for a connected and distracted world.