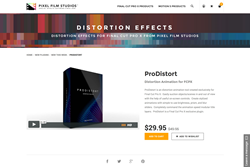 ProDistort is easy to use in Final Cut Pro X. Start by placing a picture or video clip in the FCPX timeline. Place one of the title presets above the media. Next, adjust the title handle to tweak the animation timing. Use the on-screen controls to change the position, rotation amount, and rotation radius. Lastly, compound ProDistort and the object.

ProDistort presets are built as titles to allow editors to have complete modular control over animation timing. To adjust timing, simply drag the handles on either side of the title preset. The shorter the title layer, the shorter the duration of the animation and vice versa. In addition to overall timing, ProDistort also allows users to adjust the speed method with a drop down menu that can be found in the inspector.

Utilize simple sliders to adjust the stylization of the animation. For a cinematic look, combine the blur, prism, and brightness sliders in varying degrees. For a smoother look, bring the slider values closer to zero. With suction strength, editors can influence the speed of the animations in relation to the overall duration of the title layer.

ProDistort allows video editors to animate and distort object(s) in a scene without having to set a single keyframe. Utilize the on-screen controls to change the suction point position, rotation animation amount, and rotation radius. Create swirling and or suctioning effects in varying speeds to animate green screen footage, .png pictures, files, or entire scenes in/out with ease. This plugin is a Final Cut Pro X exclusive plugin.