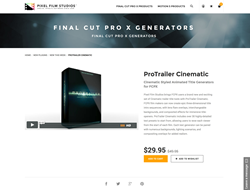 ProTrailer Cinematic includes over 30 different presets, each with zoom blur and depth of field options. In this plugin every individual preset can be modified by changing colors, lighting, and fonts. FCPX Users can change the text to any desired font, and adjust the full 3d aspects of each letter using the standard FCPX Controls. FCPX users can drop in separate background generators for different environments, and composite title layers for added effects.

ProTrailer Cinematic includes numerous different combinations of keyframe-less animations. By using the simple animation drop-down menus located in the inspector window for each text generator, FCPX users can animate each sequence in and out using individual letters, entire words, or everything all at once. Each animation direction can be changed so titles animate in a forward-fashion, backwards, or even in a random sequence.

ProTrailer Cinematic brings a new addition to the FCPX ProTrailer library with compositing tiered layers. FCPX users can now place in a backdrop if desired, a text generator, and composite overlays for added realism, creating the ultimate title sequence. Numerous composites and flare layers can be stacked for even more effects and lighting overlays.

ProTrailer Cinematic is an all new set of Animated Title Generators, and effect overlay title layers for Final Cut Pro X. FCPX users can drag, drop, and stack the desired presets on the timeline, modify the text in real-time, and choose from all the different intro and exit animations. Each preset in ProTrailer Modern can be paired with a background generator, allowing users to place each element on the timeline and modify each individually.