The Jazz Edge Orchestra 1990-2015 History Book, recounts and celebrates the history of one of St. Louis’ premier “Big Bands”. This compilation of news articles, photos and memorabilia from the archives of George C. Davis, III and Dr. Don Cook, Sr., also includes interviews with the Orchestra’s music directors Robert Edwards, Prince Wells, III, Anthony Wiggins, and Thomas Moore about their lives as musicians, the nature of jazz, and their commitment to the St. Louis jazz scene. 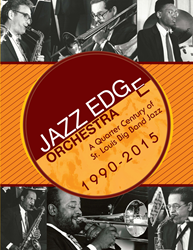 The Jazz Edge Orchestra 1990-2015 History Book is a testament to the talented musicians who have spent more than 25 years performing, teaching and showcasing emerging musicians in the St. Louis community. The Book follows their growth from a Washington University Jazz ensemble and the Harris Stowe Jazz Ensemble incorporated as a non-profit in 1990 to a dynamic 17-piece orchestra performing in such top St. Louis venues as Powell Hall, the Sheldon Concert Hall, the Arch, and the Touhill Performing Arts Center. Photos, news articles, and programs add depth and context to the story of this determined group of musicians.

Many nationally and internationally known musicians such as Clark Terry, Frank Foster, James Moody, Lester Bowie, and Jimmy Wilkins, have performed with the Band. The Band is an incubator for local and national talent such as Montez Coleman, Russell Gunn, Tony Suggs, Danny Campbell, Adaron Jackson, and Kasimu Taylor, who came into the Band as students and had their musical horizons expanded by those experiences.

In its rich 25-year history and in the present, The Jazz Edge Orchestra continues to “preserve the roots of big band jazz, continue its evolution, promote quality musical programs, provide educational performance to the under-served, and support music education in the St. Louis community.”

The Book is published by Mira Digital Publishing and will be available February 2017 through the Jazz Edge Orchestra website, http://thejazzedge.com, and at the upcoming Tribute to Wes Montgomery in June 2017. Those who are interested in purchasing this great history book should contact Dr. Don Cook, Sr. business manager, at 314-707-7717.