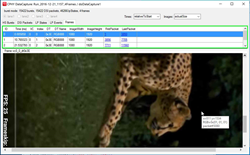 "At-speed protocol capture and analysis are critical to the successful deployment of next-generation display devices based on the MIPI DSI-2 standard, and this is due to the incessant drive for resolution, frame rate, and multi-touch enhancements as well as other projection innovations in virtual reality or lighting systems," said Dr. Mohamed Hafed, Introspect Technology CEO. "Our latest DSI-2 protocol analysis capability has been developed in lock-step with industry leaders and with the MIPI Alliance technical working groups responsible for refining this highly sophisticated display conduit, and our analyzers have already proved to be an indispensable tool at integration laboratories worldwide," he elaborated. True to Introspect's tool development strategy, the DSI-2 Protocol Analyzer capability has been added to Introspect's miniature hardware C-PHY and D-PHY analyzers, thus maintaining instrument form factor and offering a uniform test solution from lab to production. For the first time in the industry, a single test technology can be deployed during early test chip proof of concept validation, then during product engineering and validation, then during final production test, and finally during system-level functional test or integration.

The DSI-2 Protocol Analyzer in the SV3C relies on time-stamp technology to provide a high-resolution view of sparsely distributed events in very large transmission records. Additionally, it contains deep vector memory for holding a multitude of transmission bursts in a realistic and application-oriented manner. For example, the system can be enabled to capture video streams indefinitely until an error occurs, whether the error is in the CRC of a packet, its data type, or whether it is due to an arbitrary illegal event. Captured streams are either retained or discarded after error statistics are collected. Similarly, in order to provide true device emulation capability, the Protocol Analyzer contains automatic hardware decoding of MIPI Display Command Set (DCS) operations, and it responds to tearing effect trigger commands, a coveted feature of modern display interfaces. Finally, the Analyzer contains hardware packet error rate checkers for monitoring long term reliability of DSI-2 communications links or for performing regression testing and qualification.

About Introspect Technology
Introspect Technology offers the most extensible measurement and optimization tools for high-speed digital product engineering teams worldwide. Our portable, software-defined instruments deliver unprecedented productivity enhancement throughout all stages of multi-GHz product development: from bring-up characterization to system-level integration and optimization. Our mission is to enhance our customers’ competitiveness, product quality, and time-to-market.