Cattle trail-era focus exhibition will feature collectors’ items about the greatest migration of livestock in world history. Displays will include an 1873 trail map and guidebook for drovers, one of the four most important books on the cattle industry and one of the best books about the Texas Longhorn cattle breed during the 19th century. 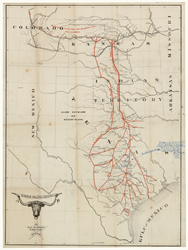 In its brief existence from 1857 to 1884, the Chisholm Trail had been followed by more than five million cattle and a million mustangs, the greatest migration of livestock in world history.

The Sid Richardson Museum will join the three-state (Texas, Oklahoma and Kansas) 2017 celebration of the 150th anniversary of the Chisholm Trail. “Hide & Horn on the Chisholm Trail” will run from Friday, January 6, 2017, through Sunday, May 28, 2017. Visitors will view rarely seen items from the cattle trail era, “Guests of Honor” on loan from the Rees-Jones Collection of Dallas, another private collection and the Sid Richardson Museum. This focus exhibition will be on display concurrently with the museum’s ongoing exhibition, “Legacy,” which depicts the clash of cultures of the 19th century American West.

According to the Texas State Historical Association, after the Civil War, the growing demand for beef was supplied by Texas Longhorn cattle. Sturdy and able to graze on whatever plant material was available, the breed was particularly suited to cattle drives. From the feeder trails in South Texas across Indian Territory (Oklahoma) to railheads in Kansas, the Chisholm Trail was the major route out of Texas for livestock. The market provided a steady source of income for Texas ranchers. In its brief existence from 1857 to 1884, the Trail had been followed by more than five million cattle and a million mustangs, the greatest migration of livestock in world history. The Trail was named after the Scot-Cherokee trader Jesse Chisholm.

“Predating the arrival of the train and discovery of oil, the Chisholm Trail era was an indispensable, early chapter in Fort Worth’s history,” said Mary Burke, director of the Sid Richardson Museum. “Being a waypoint along the trail spurred the city’s early growth and helped define its Western heritage, which even today differentiates Fort Worth from any other city.”

About the Rees-Jones Collection
The Rees-Jones Collection is devoted to the history and legacy of Texas and the trans-Mississippi West. The collection includes fine art as well as rare and historically significant books, maps, manuscripts, and archival materials on the discovery, exploration, settlement and interpretation of the trans-Mississippi West.

“The Best and Shortest Cattle Trail from Texas,” by Kansas Pacific Railway Company, St. Louis, Missouri: Levison & Blythe, 1873, Rees-Jones Collection. The railway used trail maps and guidebooks to lure cattle drovers from the shipping centers of rival railroads by highlighting its availability to routes of the cattle trails.

“Historical and Biographical Record of the Cattle Industry and the Cattlemen of Texas and Adjacent Territory,” by James Cox (1851‒1901), Saint Louis: Woodward & Tiernan Printing Co., 1895, Rees-Jones Collection. One of the four most important books on the cattle industry, this book offers a comprehensive early range history and is a cornerstone of any range library.

“The Longhorns” by J. Frank Dobie (1888‒1964), Boston: Little, Brown & Co., 1941; inscription by Dobie to Sid Richardson, March 12, 1942, Sid Richardson Museum. This book is one of the best accounts of the traditions of the Texas Longhorn cattle breed during the 19th century. Sid Richardson enjoyed a warm friendship with the American folklorist; Dobie, at Sid’s invitation, used Richardson’s island ranch as a writer’s haven in 1939 when he wrote the book.

“The Texas Steer” by Charles M. Russell (1864‒1926), Roman Bronze Works, New York, private collection. In 1925, Russell created a reclining longhorn in plaster to give as Christmas gifts to friends; he gave each longhorn distinctive horn shapes and painted it in a variety of colors. After Russell’s death in 1926, several of the plaster versions were cast in bronze with permission from his widow. The casts continued to be fabricated into the mid-1970s.

About the Sid Richardson Museum
Established in 1982, the Sid Richardson Museum features paintings by Frederic Remington (1826‒1909) and Charles M. Russell of the 19th century American West during westward expansion. Legendary Texas oilman and philanthropist Sid W. Richardson (1891‒1959) amassed one of the most significant private collections of Remington’s and Russell’s in the United States. Admission is free to the museum, which is open daily except for major holidays. For information, visit http://www.sidrichardsonmuseum.org, or call 817.332.6554.

"Historical and Biographical Record of the Cattle Industry and the Cattlemen of Texas...," James Cox, 1895, Rees-Jones CollectionOne of the four most important books on the cattle industry, this a comprehensive early range history.

"The Longhorns," J. Frank Dobie, 1941, Sid Richardson MuseumThis book is one of the best accounts of the traditions of the Texas Longhorn cattle breed during the 19th century.