In 2016 AnyLogic acquired global leadership in the market of simulation tools for business applications. AnyLogic has been the innovation and technology leader for many years, and is now also the most used simulation software with the largest user community. 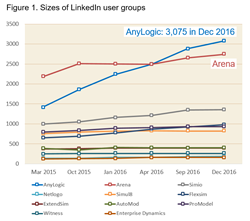 AnyLogic has been the innovation and technology leader for many years, and is now also the most used simulation software with the largest user community.

In 2016 AnyLogic acquired global leadership in the market of simulation tools for business applications. AnyLogic has been the innovation and technology leader for many years, and is now also the most used simulation software with the largest user community.

Although there is no official research on the size of the market and the market shares (and software revenue numbers are not public), indirect data was used to make estimations. The data used in this analysis are:

The dynamics of LinkedIn user groups in the last two years is shown in Figure 1. The AnyLogic community is the one that grows most rapidly. It became the largest one in spring 2016 and by December 2016 it had over three thousand members.

The number of case studies at the Winter Simulation Conference were counted following these rules:


The dynamics of the WinterSim “mind share” over the last four years is shown in Figure 2.

Arena®, a discrete event only tool and one time the absolute leader and virtual standard for simulation has shown a rapid decline in popularity over the past few years due to new technology becoming available. The data also shows that tools with agent-based or multimethod capabilities are used as widely as discrete event only, which is attributed to AnyLogic’s success.

The other conference to consider is the International System Dynamics Conference. These numbers are not provided as the only tool from the chosen set that is used by the System Dynamics community (along with the traditional SD software) is AnyLogic. There is also a couple of INFORMS conferences, but those are dedicated mainly to other types of analytics and non-dynamic simulation.

AnyLogic is also the only tool that has its own annual Conference attended by 100+ simulation professionals where tens of industry case studies are presented each year. The AnyLogic Conference website is http://www.anylogic.com/conference.

This market and mind share analysis above is based on the limited data that is available, but simple comparison of the LinkedIn and WinterSim data (Figure 3) is a good argument for the conclusions on the market state and trends being the right ones.

The AnyLogic Team is very happy to see the growing support from the worldwide simulation community. The AnyLogic Cloud is already available and is believed to significantly change the way people use simulation models.

About AnyLogic
AnyLogic North America, LLC along with The AnyLogic Company is a leading provider of dynamic modeling and simulation tools for business applications with offices in Chicago, IL USA and St. Petersburg, Russia. AnyLogic simulation software, first released in year 2000, is the first and only tool that brings together System Dynamics, Discrete Event, and Agent Based methods within one modeling language and one model development environment. The language of AnyLogic has unmatched flexibility and enables the modeler to capture the complexity and heterogeneity of business, economy and social systems at any desirable level of details to gain deeper insight into interdependent processes going on inside and around the organization.