New Book, The Power of God’s Name Jehovah, Sheds Light on What Author Sees as an Error in Christianity

The Power of God’s Name Jehovah, a new book by author and journalist Isaac Janai, takes the reader on what he calls a “powerful journey to the road of truth.” 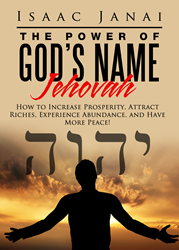 The Power of God's Name Jehovah By Isaac Janai

"May people know that you, whose name is Jehovah, You alone are the Most High over all the earth."--Psalms 83:18

Isaac Janai is proud to announce his new book The Power of God’s Name Jehovah. Janai believes the book can been viewed as controversial because it delves into an interpretation of the bible not currently taught in Christianity. Isaac Janai explains in the book why the personal name of God has been replaced with titles such as "Father," "Creator," "the Almighty," "Sovereign Lord," and "the Most High." The book was published by BookBaby and released on June 1st.

In his research, the author finds the following statements and explains their true meaning in the book:

“However, Janai explains, “Jesus Christ never claimed to be on the same level as his Father, considering the following statement he himself quoted:

According to the book, Jesus Christ even revealed his Father’s name to his disciples. However, many Christian denominations worldwide still believe that the divine name of God should not be used in worship, because it is not known exactly how to pronounce it.

Janai explains, “The error of removing God’s name from the Bible has been especially damaging to those who are searching for the truth about Jesus Christ, his Father, and God’s true purposes for mankind.”

About the Author: Isaac Janai (born April 22, 1973) is an American author and journalist. His works range from spirituality, destructive cults, interpersonal relationships, and non-fiction.

This book is available in the NOOK book format and priced at $2.99. It is published by BookBaby whereas sold by Amazon and Barnes & Noble at their official websites.