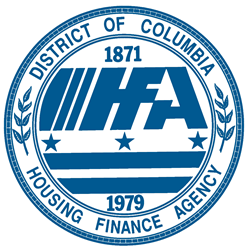 Grandparents rearing their grandchildren often face unique issues related to family structure, including budgetary pressure. Living in a community like Plaza West will help to ease the financial burden of grandparents by providing affordable housing.

The District of Columbia Housing Finance Agency (DCHFA) closes its second development within in a week by lending tax exempt note proceeds to finance a portion of the debt required to acquire and construct Plaza West, which is located at the intersection of 307 K Street NW and 1035 4th Street NW. DCHFA, through a direct purchase of bonds by Citi Community Capital, is providing $44.1 million in tax exempt financing to construct the $89.7 million project. The Agency also underwrote $32 million in four percent low income housing tax credit equity syndicated by Enterprise Community Investments, Inc. Plaza West, which is an intergenerational housing development featuring family and senior housing, will be located in the Mount Vernon Triangle neighborhood of Ward 6. The project involves the construction of a 12 story building containing 223 units. The building will include a Grandfamily component (Grandfamily), with 50 units reserved for low-income grandparents who are raising the children of family members who, for a variety of reasons, are not able to provide for the general welfare of their child. “Grandparents rearing their grandchildren often face unique issues related to family structure, including budgetary pressure. Living in a community like Plaza West will help to ease the financial burden of grandparents by providing affordable housing as well as creating a supportive community of peers that are taking care of their grandchildren.” said Maria K. Day-Marshall, Interim Executive Director, DCHFA.

The building will have a 24-hour front desk concierge. Each residential floor will have a laundry room and lounge. Plaza West’s outdoor amenity space, approximately 9,500 square feet, will include a basketball court, garden, and courtyard. The building will also have 51 underground parking spaces free for residents on a first come, first served basis.

The principal developers of Plaza West are Mission First Housing Development Corporation (MHDC), Golden Rule Plaza Inc., through a single-purpose entity, Plaza West LLC, and the Henson Development Company. MHDC is a developer of affordable housing in the District of Columbia. The company was founded in 1997 and has been the developer or development consultant on 10 multifamily affordable rental housing properties in the District. Seven of those transactions were financed by DCHFA.

The District of Columbia Housing Finance Agency was established in 1979 to stimulate and expand homeownership and rental housing opportunities in Washington, D.C. We accomplish our mission by offering below market rate mortgage loans to lower the homebuyers’ costs of purchasing homes and by issuing mortgage revenue bonds