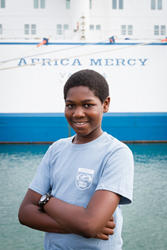 Caleb is a committed writer who worked for two years in our (Mercy Ships) Writing Club developing his own stories and kindling ideas in other writer’s imaginations.

Scholastic announced today that a student onboard Mercy Ships Africa Mercy was selected as a Scholastic News Kids Press Corps Kid Reporter. Ninth grader Caleb Biney is one of 24 new and 15 returning Kid Reporters from across the USA and around the world to join the award-winning student reporting program. He will report news from the very unique perspective of a student living onboard the world’s largest private hospital ship, the Africa Mercy which is docked in Benin, West Africa.

Biney, 14, was born in the Bronx, New York. He lived there as an infant and then moved onboard Mercy Ships with his family where he has lived ever since. His parents are full-time volunteers with Mercy Ships. Biney attends the accredited Academy on the ship with other students from nine nations. They are all children of Mercy Ships volunteers who live and work on the floating hospital. They provide free surgeries, train healthcare professionals and provide other services in Africa.

Kim Robinson, Biney’s volunteer English teacher commented on the selection of her student, “Caleb is a committed writer who worked for two years in our Writing Club developing his own stories and kindling ideas in other writer’s imaginations. He has a love of details, and a love of pulling stories together. As a result, he has opted to take an elective writing course online this year. I am excited to think of what he might contribute to the Scholastic News Kids Press Corps!”

Biney is eager to begin reporting for the Scholastic News Kids Press Corps from Africa. He joins the largest team of international Kid Reporters to date coming from the United Kingdom, New Zealand, Nigeria, China, and Thailand.

ABOUT MERCY SHIPS:
Mercy Ships uses hospital ships to deliver free, world-class healthcare services, capacity building and sustainable development to those with little access in the developing world. Founded in 1978 by Don and Deyon Stephens, Mercy Ships has worked in more than 70 countries providing services valued at more than $1.3 billion, treating more than 2.56 million direct beneficiaries. The Africa Mercy is crewed by 400 volunteers from up to 40 nations, an average of 1000 each year. Professionals including surgeons, dentists, nurses, healthcare trainers, teachers, cooks, seamen, engineers, and agriculturalists donate their time and skills to the effort. With offices in 16 nations, Mercy Ships seeks to transform individuals and serve nations one at a time. For more information click on http://www.mercyships.org

For more than 16 years, the Scholastic News Kids Press Corps has delivered “news for kids, by kids.” Stories by the Kid Reporters can be found in issues of Scholastic classroom magazines, which are read by more than 25 million students nationwide, and are available online at: http://www.scholastic.com/news.