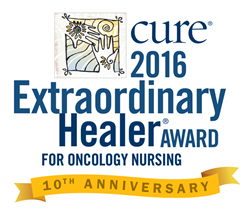 These three finalists exemplify what it means to be an extraordinary healer who goes above and beyond the call of duty to help people.

CURE Media Group, the nation’s leading consumer digital and print media enterprise focused entirely on patients with cancer, today announced that three nurses who have dedicated their careers to helping cancer patients, their families, and their oncology coworkers have been chosen as finalists for the prestigious 2016 CURE® Extraordinary Healer® Award for Oncology Nursing.

Each year to celebrate oncology nurses, CURE® magazine gives readers a unique opportunity to honor a special oncology nurse by nominating one through an essay that describes the compassion, expertise and helpfulness exhibited by their nominee.

From approximately 50 nominations this year, Lynne Malestic of Eisenhower Lucy Curci Cancer Center in Rancho Mirage, California, Diana Gordon of the UNC Lineberger Comprehensive Cancer Center, and Carmi Fazio of Molina Healthcare in Oak Brook, Illinois, are in line to be chosen as this year’s Extraordinary Healer. The winner will be announced at an awards ceremony and celebration on April 28 during the 41st ONS Annual Congress to be held April 28-May 1 in San Antonio, Texas.

All three nominees, their guests and their essayists will travel to, and be recognized at, the awards event. In addition, the winning nurse and winning essay will be featured in an upcoming issue of CURE magazine, with the winner also receiving an all-expenses-paid spa trip for two.

“Oncology nursing is a challenging field that requires the unique blend of specialized medical knowledge with a passion to supporting patients, families and caregivers impacted by cancer,” said Mike Hennessy Jr., president of CURE Media Group. “The complexities of evolving cancer treatments compel oncology nurses to remain well-educated, independent thinkers who also provide comfort, education and advocacy to patients undergoing complicated, and sometimes long-term treatments for the disease. These three finalists exemplify what it means to be an extraordinary healer who goes above and beyond the call of duty to help people.”

Lynne Malestic, RN, was described by her nominator, Cera Stanford (a coworker), as an extraordinary healer through her ordinary work, which, in itself, is extraordinary. As she wrote, “A normal day for Lynne includes many hugs, tears of joy and tears of empathy sprinkled amongst her safe evidence-based practice and collaboration with physicians to provide a healing environment like no other.” Specifically, Cera nominated Lynne due to her experience with one couple that spanned several years. In a nutshell, Lynne cared for the wife through her cancer diagnosis to her passing, with in hospital support, by hosting the family for holidays, by moving the wife to her home to support hospice care, and much more. Most stories would end there, but Lynne repeated her extraordinary support when the husband was diagnosed with cancer several years later. Lynne and her family then cared for him during his active treatment through the end of his life. And her influence carries over to her home, as Lynne’s 16-year-old daughter, Lauren, is so inspired by her mother, she plans to go into oncology nursing.

Diana Gordon, RN, C.P.N.P., C.P.O.N., was nominated by coworker, Julie Blatt, a pediatric hematologist oncologist, who said of Diana, “We already had heard many good things about her. However, almost six years later I can’t remember how I was able to get my part of the job done without her,” adding that Diana is so “caring, courteous and comprehensive that she sometimes makes me look bad.” Blatt continued by pointing out that even with all of these strengths, Diana’s tour de force is in taking care of, and caring about, patients and their families. One shining example was Diana’s work with a 12-year-old boy with Ewing sarcoma and his family. In addition to researching treatment options, haggling with insurance companies and much more, Blatt wrote, “Diana continued to do the very important things for this child with terminal cancer, for his parents and his brother - the listening, adjusting pain medications, arranging hospice while continuing to offer hope by keeping an eye out for any new treatment options. I think this family likes me; they love Diana.”

Carmi Fazio, RN, MSN, ONA, was nominated by Lisa Chapman, an endometrial adenocarcinoma survivor, who said that Carmi not only pulled her out of her deepest despair but continues to be one of her best friends, even if they are thousands of miles away. In helping Lisa survive endometrial adenocarcinoma and gastroparesis, she wrote, “Carmi Fazio is the most generous soul that I know and goes beyond the role of nurse. She gives of herself completely. She makes herself available to her patients any time day or night. Her patients all have her personal phone numbers and know that they can call her at any hour. Carmi has always said that her patients have to come first. She has said that to her, her patients are so brave fighting the bravest of fights. She counsels them on their disease, scans, questions to ask their doctors, chemotherapies, pain management, and so much more. She has sent patients computers or tablets so that they could communicate with their families…In my honest opinion, Carmi Fazio is a rare breed.”

Since the inception of the Extraordinary Healer Award for Oncology Nursing in 2007, more than 1,000 nurses have been nominated. The winners and essayists honored over the past nine years have included men and women, adults and children, representing a variety of cancer centers and hospitals in seven different states.