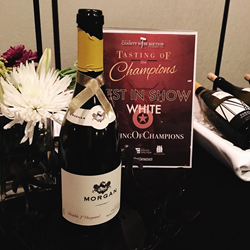 An A-list of tasting experts from the wine and culinary industries converged for South Walton Beaches Wine & Food Festival’s International Wine Competition to judge and award medals to the winning wines which will be poured and sold at the 2016 festival, April 28 – May 1.

On February 19 at the Hilton Sandestin Beach Golf Resort & Spa nearly 600 wines were poured and judged by a panel of 24 vintners, educators, collectors, restaurant owners and wine-related media. Gold, Silver and Bronze winners were named in 72 categories and a Best of Show was named for red and white wines. In all, 216 medals were awarded.

Zenato Amarone della Valpolicella 2011 was named Best of Show Red for the 2016 festival.

Castello Banfi Brunello Di Montalcino 2010 was named People’s Choice winner at the Tasting of Champions, the evening event that follows the competition where the public has the opportunity to taste the 600 wines judges earlier in the day. Tasting of Champions is produced by Destin Charity Wine Action Foundation, the recipient of proceeds from South Walton Beaches Wine & Food Festival.

Presented with support from Visit South Walton and Wine Enthusiast magazine, the festival offers the ideal backdrop for a beach getaway. South Walton beaches are consistently named among the best beaches in the country. ResortQuest by Wyndham Vacation Rentals is the Official Lodging Partner of the festival and many of their accommodations are beachfront, beachside or a short stroll to the beach. At this time, they are currently offering festival discounts on lodging. Go to Wyndham Vacation Rentals for details.

The Craft Beer & Spirits Jam kicks off the festival Friday from 6 p.m. to 9 p.m.; the Grand Tastings are on Saturday and Sunday from 1 p.m. to 5 p.m. Advance tickets are $35 for Friday; $85 for Saturday and Sunday (ticket price include Spirits Row, Champagne Lane, wine and food tastings, seminars and live entertainment); and $175 for the VIP Tasting with express entry to the Grand Tasting. Two-day Grand Tasting passes are available for $150. The VIP Tasting is Saturday from 11 a.m. to 1 p.m. and the Grand Tasting starts at 1p.m. The event is rain or shine; sorry pets are not allowed in Culinary Village. To purchase tickets and view the full festival schedule visit http://www.sowalwine.com.

ABOUT SOUTH WALTON BEACHES WINE & FOOD FESTIVAL
This year’s annual South Walton Beaches Wine & Food Festival will be held April 28-May 1, 2016 throughout the Town Center of Grand Boulevard at Sandestin. The festival features a stunning showcase of the best wines the world has to offer. Celebrity wine producers and chefs present fine wine and food pairings from the world’s most famous appellations. The Savor South Walton Culinary Village offers a sumptuous array of foods to taste, wines to pair, as well as wine and food tasting seminars and live entertainment. The event is a major fundraiser for Destin Charity Wine Auction Foundation, which benefits children in need in Northwest Florida. For more information, including a list of attending winemakers and to purchase tickets, visit http://www.SoWalWine.com.