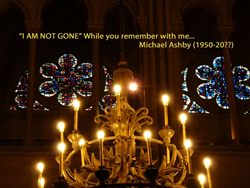 ‘i love this poem made me tear up in honor and memory of my brother who commited sucide oct 4 marked his anniversary death. and this poem is perfect’ Doris V Cordero

English poet Michael Ashby has just achieved 1,200,000+ million Facebook Likes, Loves & Wows for his remembrance poem “I Am Not Gone” on his “Death, Funeral, Bereavement Poems” facebook page showing how this poem has comforted the bereaved around the globe. Michael wrote “I Am Not Gone" in 2006 after watching a TV report of Bindi Irwin addressing the public memorial service for her father Steve Irwin- the world famous conservationist and TV personality “Crocodile Hunter”- at Australia Zoo's Crocoseum. In the elusive quest for sleep that followed Michael asked himself "what words of comfort could anyone of us offer our loved ones?"... and the words of his poem ”I Am Not Gone” answered.

A few months later a dear friend and neighbour passed away, and Michael gave a copy of this poem to his widow Joan. On finding his poem had comforted her and that she had hand copied it to local & New Zealand family he realised that his remembrance poem should be shared on the web and his website thefuneralpoem.com and subsequently this Facebook Page were born… & more funeral poems were delivered … over 50 to date by Michael.

This week, 66 year old Michael said “I am deeply moved by how many people around the globe have had their lives touched and comforted by my poem of love and remembrance from Sidmouth. I am extremely proud that my facebook post is providing a global platform for sharing personal bereavement and funeral poems. My thoughts at the moment are on this weekend and the "Remembrance Sunday" poem I wrote and posted on facebook last year after watching the brutal war film ‘Kajaki: The True Story’…"

ABOUT
English poet Michael Ashby has touched lives in over 172 countries with his poems on thefuneralpoem.com and is now reaching millions with his Facebook Page “Death, Funeral, Bereavement Poems" . He has two poetry books published “Alchemy” & “Funeral Poems” both available in paperback & Kindle on amazon.com.

Grandpa Michael is fortunate to live with his poems in South West England on Devon’s spectacular Jurassic coast. Some nights he is awoken by the sounds of an argument between the sea and the local pebble beach coming in through his bedroom window. He's not sure who starts it, but they always settle in the end.

He spends part of each day gazing out to sea, waiting for his next poem to appear on the horizon.