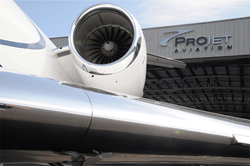 ... Leesburg Executive Airport is rapidly becoming the destination of choice for private jet travelers in the DC Metro Region.

ProJet Aviation received national recognition for flight support (FBO) services at Leesburg Executive Airport in the FltPlan 2017 Pilots' Choice Awards, climbing to #18 in the nation and #3 in the Northeast Region. ProJet also ranked and #3 in the Ace, and #15 in the Star Award categories. Leesburg Executive is the closest general aviation airport to Washington DC, the Dulles Technology Corridor, and Virginia's growing horse and wine country.

The rankings reflect the results of the eighth annual survey of FltPlan's 160,000-plus active, registered users, most of whom fly multiple weekly trips.

"Leesburg Executive Airport is the gateway for businesses and visitors from around the world to Leesburg and Loudoun County, and an important engine for the regional economy. The airport's reputation for excellence is paramount to its success, and ProJet delivers excellent services each and every day," said Leesburg Mayor Kelly Burk.

ProJet has ranked highly in the awards every year since becoming the FBO operator at Leesburg Executive (KJYO), and 2017 marks the second year in a row that the company has received a top 20 ranking nationally.

"We have an extraordinary chemistry with our clients, both based tenants and corporate transients. Our team sincerely wants to help people, and that translates into bringing quality and value to their lives. People respond to that type of service." said Julie O’Brien, Director of Flight Support and Marketing for ProJet Aviation. “It’s easy to see why Leesburg is rapidly becoming the destination of choice for private jet travelers in the DC Metro Region.”

About ProJet
ProJet Aviation is the DC metro region's premier private aviation hospitality company, dedicated to helping people accomplish extraordinary things through the wonder of flight. ProJet provides a world-class flight support/FBO experience including arrival and departure services, fueling, and facilities leasing at Leesburg Executive Airport (KJYO), the private aviation gateway to Washington DC, the Dulles Technology Corridor, and Virginia's Horse & Wine Country. Founded in 2007 as a partnership between former airline pilot entrepreneur Shye Gilad, and noted entrepreneur and philanthropist Sheila C. Johnson, Founder & CEO of Salamander Hotels and Resorts, ProJet’s “aviation hospitality” mindset combines the operational integrity of the world’s best airlines with the refined service of a world class resort. ProJet is the host sponsor of the annual Aviation Education & Career Expo, which provides an aviation and aerospace forum for thousands of students in the Mid-Atlantic Region, and has awarded hundreds of thousands of dollars in scholarships since its inception. ProJet’s numerous accolades include recognition as one of the top FBOs in the country in the fltplan.com Pilots’ Choice Awards, a Washington Business Journal Best Place to Work, and an Inc. 5000 Fastest Growing Company.