The Hi5 VR Glove is the first consumer product for the leading motion capture technology company who has partnered with HTC VIVE to create fully immersive experiences in VR. 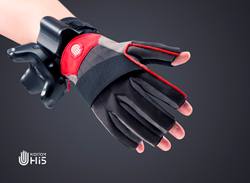 The Noitom Hi5 VR Glove is compatible with HTC Vive.

With freedom of movement and accurately captured data, Hi5 users will be able to immerse themselves seamlessly into their virtual worlds.

Starting the new year with a keen focus on its consumer product line, Noitom, the world-leading motion capture company, will be in Las Vegas during the Consumer Electronics Show (CES) from January 5-8 where they will reveal their latest product: the Hi5 VR Glove.

With the advent of this latest product announcement, Noitom continues to further establish itself as a major player in the virtual reality industry.

“The ability to capture complete hand movement and simulate all five fingers in VR in addition to providing complete, un-occluded motion is a capability we have finally been able to achieve with the Hi5 Glove,” says Dr. Tristan Dai, CTO of Noitom and the creator of Hi5. “With freedom of movement and accurately captured data, Hi5 users will be able to immerse themselves seamlessly into their virtual worlds. We look forward to a continued partnership with HTC VIVE and to giving consumers the opportunity to explore countless interactive experiences in VR.”

The Hi5 VR Glove is Noitom’s first foray into the consumer product market following the launch of their Perception Neuron full-body motion capture system which was designed with prosumers and developers in mind. Similar to the technology applied in Perception Neuron, the wireless Hi5 Glove works with a series of IMU (Inertial Measurement Unit) sensors that can accurately relay motion data from glove to computer in real-time. The Hi5 VR Glove contains six, nine-axis IMU sensors on each finger for full left-and-right-hand motion capture with high-performance tracking.

Players using an HTC VIVE can now have total freedom and control of their hands within a virtual environment.

Noitom will be hosting private demos at The Palazzo to present the Hi5 VR Glove with a custom-designed experience developed on UNITY. Set in a virtual sandbox, the one to two user experience will allow players to interact with objects and to use their hands to perform actions such as grabbing, throwing, stacking, and drawing in a 3D space. The one or two-person setup will allow players to fully interact with their environment. The demo experience will showcase all that is possible when you can completely immerse your own hands into the game.

Working with groundbreaking companies like HTC VIVE and incorporating their innovative technologies has allowed Noitom to deliver on the promise to create fully immersive VR content for the consumer market.

“The Noitom Hi5 Glove is a critical component to delivering an immersive VR experience and building out the ever-growing Vive ecosystem,” said Dan O’Brien, VP Virtual Reality, HTC VIVE. “We built Vive to deliver the most immersive, room-scale VR experience on the market today. Companies like Noitom help us meet this vision and we’re excited to see what the Hi5 Glove offers to the VR experience.”

For more information about the Hi5 VR Glove, please visit hi5vrglove.com. To learn more about Noitom, go to noitom.com.