Ductwork Manufacturing Titans To Facilitate The Use Of Aeroseal Duct Sealing On Construction Projects Throughout Saudi Arabia, UAE, And Elsewhere 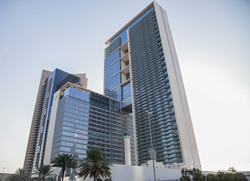 From the Daman Building Skyscraper in Dubai to the state-of-the-art Arzanah Medical Complex in Abu Dhabi, aeroseal technology has already proven to be a project saver for some of the most prestigious construction projects in the Middle East.

Aeroseal LLC, sole owner and licensee of aeroseal duct sealing technology, today announced Doby Verrolec as the company’s representative in the Middle East’s gulf region. In this role, Doby Verrolec will promote and facilitate the use of aeroseal technology for use in new construction and HVAC retrofit projects throughout all Arab States of the Persian Gulf (excluding Iraq).

As the leading manufacturer and supplier of high-quality ductwork components and installation systems for much of the Middle East, Doby Verrolec has built a reputation as the region’s most trusted experts in duct system performance. Their strong relationships with building contractors operating within the GCC (Gulf Cooperation Council) provides a significant opportunity to extoll the benefits of using aeroseal technology to increase HVAC system efficiency and reduce labor costs associated with installing and repairing ductwork.

“When it comes to ductwork expertise, no other company operating in the GCC is as respected and trusted as Doby Verrolec,” said Neal Walsh, senior vice president of Aeroseal LLC’s commercial business unit. “They understand the unique benefits that aeroseal duct sealing brings to the table and their recommendation provides invaluable credibility.”

As Aeroseal’s GCC representative, Doby Verrolec will also ensure that regional Aeroseal dealers receive the supplies and support they’ll need to succeed in this growing market.

“From the Daman Building Skyscraper in Dubai to the state-of-the-art Arzanah Medical Complex in Abu Dhabi, aeroseal technology has already proven to be a project saver for some of the most prestigious construction projects in the Middle East,” said Malcolm Moss, managing director at Doby Verrolec. “We look forward to promoting this new technology as well as supporting all of the service providers that are helping ensure the successful adoption of aeroseal across the Middle East.”

Developed at Lawrence Berkeley National Laboratory with funding from the U.S. Department of Energy, aeroseal technology works from the inside of the ductwork to seal leaks. Unlike traditional manual sealing, this inside/out approach makes it easy to access the entire duct system. The computerized aeroseal process provides “real time” results, ensuring that the job is effectively accomplished the first time. A final printout report provides an official record certifying the concluding leakage rate of the duct system. More information can be found at http://www.aeroseal.com.

Doby Verrolec is the largest UK manufacturer of ductwork jointing systems & components. With a Middle East presence that began in 1999, the company’s Middle East facility is located in the Hamriyah Free Zone, Sharjah, UAE. Doby Verrolec is part of the global manufacturing group, Heitkamp & Thumann, market leaders in the production of high precision parts. For more information, visit http://www.dobyverrolec.com.