The International Association of Registered Financial Consultants (IARFC) announces Ric Edelman RFC® of Edelman Financial Services as the 2017 recipient of the Loren Dunton Memorial Award. This award honors a person who has made a substantial contribution to the financial services profession and/or the financial interest of the public. 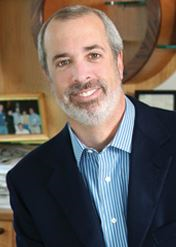 Like Loren Dunton, Ric is a man of vision whose impressive accomplishments reveal a dreamer and an innovator who clearly makes a difference as he creates his life’s work....IARFC Chairman H. Stephen Bailey.

Generally regarded as the “Father of Financial Planning”, Loren Dunton organized financial professionals in the late sixties and with their help created the financial planning movement. Dunton developed associations, magazines, colleges, university programs and foundations. He used his experiences to frankly explain what all financial advisors now recognize - that the ethical sales of financial products and the delivery of competent advice is a noble calling. Loren Dunton was a man of vision who cared deeply about both financial consultants and consumers.

In bestowing the Loren Dunton Memorial Award, the IARFC recognizes Ric Edelman’s contribution to Loren Dunton’s principles and mission. “Our nominating committee reviewed Ric Edelman’s career history and the impressive recognition he has received from both inside the financial services industry and outside organizations,” explained H. Stephen Bailey, IARFC Chairman. “Like Loren Dunton, Ric is a man of vision whose impressive accomplishments reveal a dreamer and an innovator who clearly makes a difference as he creates his life’s work.”

Ric Edelman interests are varied and prolific. His resume portrays an acclaimed financial advisor, best selling author, award winning host of radio and TV shows, an entertaining and informative educator and a giving community philanthropist. Highlights of his career reflect:

“It’s a great honor to receive the 2017 Loren Dunton Memorial Award,” acknowledges Edelman. “Improving financial literacy in America has been the focus of my life’s work for the past 30 years. My wife Jean and I founded Edelman Financial Services in 1987 and it’s been a privilege to serve our clients and provide financial education to consumers across the country who are working hard to achieve financial success. I am grateful to the IARFC for this recognition.”

To read more about Ric Edelman, visit the Edelman Financial website – about ric. For additional information on the IARFC and the Loren Dunton Memorial Award, visit http://www.iarfc.org.