The James Beard Award Winning partners in CookNSolo, Chef Michael Solomonov and Steven Cook, own one of the leading restaurant groups on the East Coast. As they work to expand the reach of their individual brands, they partnered with xtraCHEF for deeper and more effective insight and control into the backend of their operations. 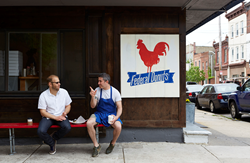 Michael Solomonov and Steven Cook of CookNSolo sitting outside of Federal Donuts.

xtraCHEF is allowing us to manage our cost of goods in real-time and better than ever before,” said Michael Solomonov. “No other solution is capable of delivering price and value decisions as sales occur. They’ve changed the game.

xtraCHEF, an invoice processing and cost of goods management platform for restaurants, has partnered with CookNSolo and their four restaurant concepts – Zahav, Abe Fisher, Federal Donuts, and Dizengoff. By maximizing their relationship with xtraCHEF, CookNSolo will leverage cost of goods data while automating the invoice processing within their restaurants. xtraCHEF’s key advantage is its ability to integrate directly with QuickBooks Online and allow bills to be generated with one click of a button on your phone.

“Our goal is to empower the on-site management team with real time intelligence on price and cost so they are better equipped to make better business decisions. xtraCHEF helps Michael, Steven and their team to achieve this quickly” said Andrew Schwartz, CEO xtraCHEF.

xtraCHEF is a mobile and cloud-based solution which automates the payable cycle, eliminating the manual task of invoice entry into financial and inventory systems. Further, xtraCHEF notifies and reports on price changes as they occur and works within the businesses own approval workflow.

“xtraCHEF is allowing us to manage our cost of goods in real-time and better than ever before,” said Michael Solomonov. “No other solution is capable of delivering price and value decisions as sales occur. They’ve changed the game, and I’m confident that we will be more exponentially more efficient as a business in 2017 because of xtraCHEF.”

ABOUT xtraCHEF
XtraChef is a mobile, subscription-based application that captures, digitizes, maps, and auto-codes vendor invoices and purchase inventory in real-time. Extraction technology reads an invoice image line-by-line, warehouses it in the Cloud, and provides timely and accurate reporting that allows restaurants to gain transparency in their workflow and to have a firm grasp on their daily spending across multiple outlets from a simple and easy to use platform. xtraCHEF lets you control your kitchen’s operations from the palm of your hand. We are the inexpensive and disruptive tool you have been waiting for. It’s that simple