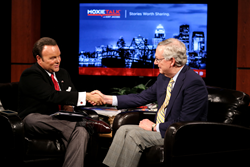 We explore who the person is behind the public persona.

Kirt Jacobs interviews Senate Majority Leader Mitch McConnell on the premiere episode of Moxie Talk with Kirt Jacobs, previously known as Leadership Landscape TV. The show features interviews of top leaders and role models in their fields of expertise, and explores their journeys to success.

“We are excited to share the story of one of our country’s most influential leaders as the premiere interview of our new brand and platform.” said Jacobs. “Mitch McConnell’s steady rise has been well documented. What may not be so well documented is the story of what and who influenced his journey, his internal story of the paths he took, and the defining moments of his life. We are excited and honored to give this glimpse of Senator McConnell’s own story.”

Formerly Leadership Landscape TV, the new brand and platform offers compelling interviews with leaders and role models across all fields and careers. MoxieTalk is available in both podcast and video formats; so more people can easily access the library of close to 200 interviews completed since 2005.

“We explore who the person is behind the public persona.”, said Jacobs. “Our followers frequently tell us how this inspires their own lives.”

About MoxieTalk with Kirt Jacobs
Moxie Talk with Kirt Jacobs gives an intimate look into the courage, character, and defining moments of today’s most inspiring individuals. MoxieTalk began as Leadership Landscape TV, an interview talk show to showcase the vision and influence of leaders and role models from all walks of life. Today, MoxieTalk is a multimedia platform that continues this unique and intimate format on a national scale, available on select TV stations, podcast and online video.
Facebook Twitter LinkedIn