USF Board of Trustees Issues Resolution in Support of DACA Students

The full complement of the University of San Francisco (USF) board (41 members) unanimously voted to approve a resolution in support of recent statements and actions by President Paul J. Fitzgerald, S.J., and with the vigorous recommendation that the Trump administration retain and expand the Deferred Action for Childhood Arrivals (DACA) program. 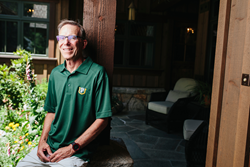 Stephen A. Hamill, chair of the USF Board of Trustees.

“The board has taken this very seriously both in terms of endorsing Fr. Fitzgerald and the USF leadership team and adding our voice in support of society’s most vulnerable,” said Stephen A. Hamill, chair of the USF Board of Trustees.

The 41 members of the University of San Francisco’s (USF) Board of Trustees unanimously voted to approve a resolution backing the recent statements and actions by USF President Paul J. Fitzgerald, S.J., to protect USF students participating in the Deferred Action for Childhood Arrivals (DACA) program. The resolution also includes the vigorous recommendation that the Trump administration maintain the DACA program.

Below is an excerpt from the resolution:
The Board of Trustees of the University of San Francisco, exercising its fiduciary duty to uphold the Catholic identity and the Jesuit mission of our university, does endorse and affirm recent statements and actions of university leadership to protect to the full extent of the law undocumented students attending USF. We have a special concern for those among our students who have voluntarily participated in President Obama’s 2012 executive order establishing the Deferred Action for Childhood Arrivals (DACA) program and urge the new administration to retain and expand it.

The board’s goal with this statement is to inspire members of the USF community, as well as other universities’ boards of trustees, to protect and promote the dignity of every human being, especially the most defenseless.

“The board has taken this very seriously both in terms of endorsing Fr. Fitzgerald and the USF leadership team and adding our voice in support of society’s most vulnerable,” said Stephen A. Hamill, chair of the USF Board of Trustees.

Fr. Fitzgerald has spoken publicly and in the media about USF’s commitment to protect undocumented students – and indeed, other members of our community whose lives and scholarship are vulnerable and at risk – to the full extent of the law. He is a signatory on recent statements from the Association of Jesuit Colleges and Universities and the Association of Catholic Colleges and Universities. USF and Fr. Fitzgerald also support the letter from the American Council of Education and 46 other higher education associations to Homeland Security in hopes that the administration will amend the executive order restricting visas from a number of countries for students who wish to study in the United States.

“In the name of the whole university community, I am very grateful to our board of trustees for taking this public stand,” said Fr. Fitzgerald. “This is an act of solidarity that clearly demonstrates their deep understanding of our mission and great commitment to our Jesuit values.”

The members of the Board of Trustees dedicate their time, expertise, and resources to the advancement of USF. As a board, they play a fundamental role in preserving the university’s mission and ensuring that long-term planning and goals are defined and executed by the university community.

Media interested in covering the board’s resolution, or to request interview time with Stephen A. Hamill or Fr. Paul J. Fitzgerald, should contact Anne-Marie Devine Tasto, senior director of media relations for USF, at 415.422.2699 or abdevine(at)usfca(dot)edu.

About USF
The University of San Francisco is located in the heart of one of the world’s most innovative and diverse cities, and is home to a vibrant academic community of students and faculty who achieve excellence in their fields. Its diverse student body enjoys direct access to faculty, small classes, and outstanding opportunities in the city itself. USF is San Francisco’s first university, and its Jesuit Catholic mission helps ignite a student’s passion for social justice and a desire to “Change the World from Here.” For more information, visit http://www.usfca.edu.