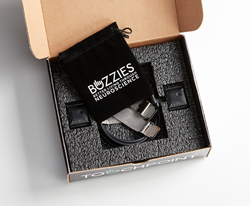 Buzzies are non-invasive, wearable devices that use patent-pending neuroscience technology to not only relieve stress and anxiety, but also improve focus, performance and more.

It is part of our mission at The Touchpoint Solution to be able to provide assistance wherever possible for people to have access to our game-changing technology.

Lauriel Lambon is a teenage boy who dreams of becoming a ship captain some day. Lauriel was diagnosed with autism when he was four years old. His mother, Aileen, nominated him for assistance in raising the $239 needed to purchase a set of Buzzies. Aileen wrote about Lauriel’s passion and fascination for ships and the sea, and his ultimate dream in her crowdfunding campaign.

“For four years in a row he always had sleepless nights thus affecting all of us in the family. He becomes an over thinker about future events and his plans. He also got frustrated when he had realized that his dream of becoming a ship captain would not come into reality. He became aware of some of his academic limitations and that added to his anxiety. But he is a very sociable person. He loves to talk to people and is excited to join events where there are a lot of people,” said Aileen Lambon.

Lauriel’s campaign recently funded and Mayo decided to make the trip to personally deliver his Buzzies. Mayo will meet with Lauriel and Aileen on Wednesday, Feb. 8 in Manila.

“It is part of our mission at The Touchpoint Solution to be able to provide assistance wherever possible for people to have access to our game-changing technology,” said Mayo. “We are able to do this through our scholarship program, which has already funded more than $30,000 in Buzzies to individuals and families in need, and now through our individual crowdfunding campaigns. Our goal is to grow the company to a point where we can giveaway one set of Buzzies for every two sets we sell.”

Mayo also said that The Touchpoint Solution is actively moving into the Philippines market as the company has already received significant interest from customers in the area.

Launched in December of 2016, Buzzies are non-invasive, wearable devices that use patent-pending neuroscience technology, called BLAST (bilateral alternating stimulation–tactile), to relieve stress and anxiety, as well as improve focus, reduce cravings, improve performance, man-age anger, reduce sensory overload and better enable sleep. BLAST works to interfere with the body’s Fight, Flight or Freeze (F3) response to stress and anxiety. The F3 system depletes the body of energy, mental strength and overall quality of life. When the F3 system is activated, all non-essential functions in the body shut down, such as logic and reason. BLAST technology can help bring the body into a calmer state.

Buzzies technology is designed to work for anyone, but has been shown to be especially beneficial for gifted children or those with autism or ADHD, working professionals, First Responders, and parents who want a cost-effective solution to help diminish stress in real-time.

Buzzies are worn on the right and left side of the body, but do not need to be touching skin to work. Wearers use the Buzzies App to turn on the vibrating units and choose one of the six pre-sets for sleep, focus, cravings, calm, performance or anger. Individual settings can also be easily customized.

Buzzies are available for purchase at http://www.buzzies.com. A set costs $239 and includes two Buzzies devices (one for each side of the body), charger, charging cables, clips and watchband attachments.

About The Touchpoint Solution
Neuropsychologist Dr. Amy Serin and child advocate Vicki Mayo founded The Touchpoint Solution in late 2015 with the mission of bringing relief to the millions of people who suffer from stress and anxiety. Over the last decade, Dr. Serin’s work in therapy and neuroscience led to the discovery that a component of successful PTSD treatment could be used as a stand-alone product for a range of individuals whose stress and intensities hamper performance, relaxation, sleep, and their ability to cope with sensory stimuli. Dr. Serin used quantitative electroencephalogram data, existing neuroscientific research, and archival data to quantify significant brain changes after just seconds of use. Dr. Serin recognized that this method was too powerful a treatment to be confined to doctors' offices due to its effectiveness and simplicity and partnered with long-time friend and child advocate Vicki Mayo to bring the Buzzies to the world. For more information please visit http://www.thetouchpointsolution.com

About Buzzies
Buzzies are non-invasive, wearable devices that use patent-pending neuroscience technology to relieve stress and anxiety, improve focus, reduce cravings, improve performance, manage anger, reduce sensory overload and better enable sleep. They can be worn on both wrists or can be placed in more discrete locations, such as socks, pockets, etc. Buzzies need to be worn on both the right and left side of the body to be effective. Buzzies officially launched to the public in December 2016 and are available to purchase online at http://www.buzzies.com for $239.