Tobeit Global will debut the new CGI-animated children's television and multi-platform series franchise "HANNI AND THE WILD WOODS" during Kidscreen Summit 2017 in Miami. 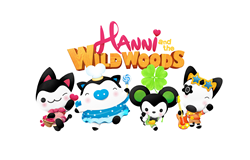 HANNI AND THE WILD WOODS

After more than 10 years in development for the global market and with a sizable Korean investment, the new CGI-animated children’s television and multi-platform series franchise HANNI AND THE WILD WOODS will debut during Kidscreen Summit 2017 in Miami, worldwide rights holder Tobeit Global Co., Ltd. announced today.

Created by Minah Eom, a concept-to-story designer, artistic director and business woman, HANNI AND THE WILD WOODS stars Hanni, an extraordinary cat donning a pink heart symbol for love and her amazing friends—Coo the dog who wears a yellow star symbol for hope, Po the pig with a blue circle ribbon symbol for bravery, and Ty-Ty the hamster sporting a green clover symbol for luck—who live together in the Wild Woods, an enchanted forest where animals talk and wacky monsters Wreck and Tangle create a lot of mischief. The four friends have a powerful mission—to protect and preserve nature. The mysteries and beauty of nature provide a vivid backdrop for an unlimited number of HANNI AND THE WILD WOODS stories that are ultimately about fun, friendship, creativity and problem solving.

HANNI AND THE WILD WOODS features an extensive array of high-quality assets in graphics, story bible, and the first six scripts for television, conceived and designed by Eom and written by highly acclaimed US live-action, animation, videogame and comic book writer Joelle Sellner (Sonic Boom, Delicious Diagnosis, Ben 10: Omniverse). The expertly prepared assets for cross-platform licensing use include: TV series, games, consumer products, publishing and other media and content. Tobeit has garnered investments of more than $5 million over the past decade for various concept graphics assets especially for use in merchandising, publishing and gaming, the rights for which it retains exclusively.

HANNI AND THE WILD WOODS is produced by Tobeit Global Co., Ltd. and company principals Young Hwa Kim, a veteran of the game industry, and Minah Eom. Astro-Nomical Entertainment partners Jay Ahn and Chris Henderson will be handling US and foreign sales at Kidscreen Summit 2017, February 13-16, 2017 in Miami.

Tobeit selected Bardel Entertainment, one of the world’s top animation companies, to produce the HANNI AND THE WILD WOODS teaser, which will debut in April at MIPTV, Cannes.

Tina Chow, Bardel’s director of development, and the production team fell in love with the character of HANNI and her story.

“We are extremely excited to work on HANNI AND THE WILD WOODS,” said Chow. “Kids are the reason we make cartoons, so telling a HANNI story with heart that promotes a great message about preserving nature is in keeping with Bardel's values to inspire and educate the next generation.”

“Created in Korea with the global market in mind, these characters and story are of the highest quality. We are proud to be unveiling HANNI AND THE WILD WOODS at this year’s Kidscreen Summit,” said Chris Henderson, Astro-Nomical Entertainment partner.

Added Astro-Nomical partner Jay Ahn: “We have had a lot of interest from investors and producers, and we hope during our meetings at Kidscreen we will find the right production and distribution partners to bring HANNI AND THE WILD WOODS to audiences around the world.”

HANNI AND THE WILD WOODS was inspired by Minah Eom’s desire to create a gift for her daughter, Erin, when she was a toddler, and her vision grew with the birth of her second daughter, Alina. “I am so happy that my daughters could experience nature’s miracles and learn the value of nature through a character and story that I developed for them and could watch with them,” she said. “Hanni grew up together with my two daughters and inspired them to dream of studying art.”

Eom’s HANNI AND THE WILD WOODS characters are celebrated for their uniqueness and simplicity of design, hand-drawn in black and white, with robust accent colors that bring to life each character’s different personality. “Similarly, nature’s beauty contrasts with the simplicity of the black and white characters,” explains Eom. “The characters stand out from the show’s colorful backgrounds, and nature looks even more beautiful with them in it.”

Minah Eom is co-CEO and founder of Tobeit Global Co., Ltd. and the creator of HANNI AND THE WILD WOODS. During her 20-year career, Eom has earned a reputation as a specialist in developing brands, characters and licensing, and story concepts across multiple industries from entertainment to gaming and business. In 2010 she received the Environment Minister’s Award for planning and producing `HANNI’s Eco Plus,’ animated educational science content (comic book series 1-5) for children.

Tobeit Global Co., Ltd. is an international development and production company specializing in visual storytelling and character development, licensing and marketing across multiple platforms for animation and gaming. The company was founded by Young Hwa Kim and Minah Eom, who are principal shareholders. The company is also funded by shareholder Korea Yakult Co., Ltd., whose vast holdings include children’s education and publishing as well as leading food and beverage products.

HANNI AND THE WILD WOODS creator Minah Eom with Hanni

HANNI AND THE WILD WOODS

Hanni of HANNI AND THE WILD WOODS