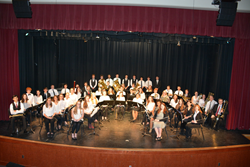 The students grew as musicians and as individuals during this very arduous audition process.

The Symphonic Band will perform at the West Virginia Music Educators Conference on March 3 at the Charleston Civic Center in Charleston, W.Va.

JP Lynch, Jefferson High School band director said, “I am so proud of my students. The students grew as musicians and as individuals during this very arduous audition process. That's really why we submit a recording every two years. Being named the West Virginia High School Honor Concert Band is just icing on the cake."

One West Virginia High School Concert Band is selected to perform at the West Virginia Music Educators Conference. Since 2011, the JHS Symphonic Band has been selected for this honor on four separate occasions.

The public is invited to listen to the topnotch group during their spring concert on Tuesday, April 11 at 7 p.m. The concert will be held in the Jefferson High School auditorium.

About WVMEA
WVMEA is a professional organization designed to engage and support music teachers in West Virginia. The membership spans from those teaching pre-school to college.

The WVMEA aims to strengthen and advance the study of music education throughout the state by providing the latest music education resources. WVMEA provides leadership models in professional growth for teachers and highlights effective techniques, resources and materials that offer special opportunities for musical growth to school students.