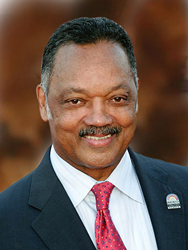 “There is no talent deficit, there is an opportunity deficit,” said Rev. Jesse L. Jackson, Sr., founder and president of the Rainbow PUSH Coalition.

What: University of San Francisco (USF) will host civil rights leader Jesse Jackson, Sr. for a community conversation as part of USF’s African American History Celebration. The event includes a one-on-one interview with Rev. Jackson and Dr. Clarence B. Jones Sr., a former speechwriter, attorney, and advisor to the late Martin Luther King Jr. and Diversity Scholar at USF, followed by an audience question and answer session.

“There is no talent deficit, there is an opportunity deficit,” said Rev. Jesse L. Jackson, Sr., founder and president of the Rainbow PUSH Coalition. “But diversity isn’t just a moral and legal imperative, it’s good for the bottom line. America will soon be a minority majority country. Those corporations and institutions that reflect and embrace this reality are more likely to thrive.”

About:     The Reverend Jesse Louis Jackson, Sr., founder and president of the Rainbow PUSH Coalition, is one of America’s foremost civil rights, religious and political figures. Over the past 50 years, he has played a pivotal role in virtually every movement for empowerment, peace, civil rights, gender equality, and economic and social justice. On August 9, 2000, President Bill Clinton awarded Reverend Jackson the Presidential Medal of Freedom, the nation's highest civilian honor.

Reverend Jackson has been called the “Conscience of the Nation” and “the Great Unifier,” challenging America to be inclusive and to establish just and humane priorities for the benefit of all. He is known for bringing people together on common ground across lines of race, culture, class, gender and belief.