According to a recent Nielsen analysis of TV viewership, several programs with a predominantly black cast or a main storyline focusing on a black character are drawing substantial non-black viewership. 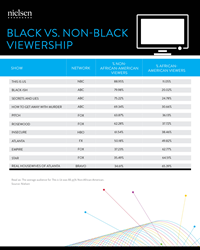 “Storylines with a strong black character or identity are crossing cultural boundaries to grab diverse audiences and start conversations."

African-Americans’ influence on mainstream America stands out in a new study from Nielsen, a global performance management company that provides a comprehensive understanding of what consumers watch, buy and listen to. Several television and cable TV programs with a predominantly black cast, or a main storyline focusing on a black character, are drawing a substantial non-black viewership, too.

While this isn’t the first time that a TV program with a black lead has drawn non-black audiences — think of “The Jeffersons,” “Sanford and Son” and “The Cosby Show” — what’s unusual is the sheer number of such programs that are carrying cross-cultural appeal.

“Black-ish,” “Secrets and Lies,” “How to Get Away with Murder,” “Pitch,” “Rosewood,” “Insecure” and “Atlanta” all average more than 50% non-black viewership. Specifically:

“Much of the American narrative lately has focused on a growing cultural divide. But Nielsen’s data on television programming show something different,” says Andrew McCaskill, Senior Vice President, Communications and Multicultural Marketing, at Nielsen. “Storylines with a strong black character or identity are crossing cultural boundaries to grab diverse audiences and start conversations. That insight is important for culture and content creators, as well as manufacturers and retailers looking to create engaging, high-impact advertising campaigns.”

Some of these programs wade into today’s real-world tensions. Episodes of “Black-ish” have included a discussion on police brutality and the presidential election, provoking debate on social media.

One of the most widely acclaimed programs of recent seasons, Fox’s “Empire,” stars Terrence Howard and Taraji P. Henson as ex-spouses grappling over the future of a multimillion-dollar hip-hop company. “Empire” commands a majority black audience, but still draws a sizable non-black viewership of nearly 40% on average each week.

It’s also noteworthy how a predominantly black audience—63% for Empire—can propel a show to Emmy-nominated, award-winning mainstream success. Henson took home a best actress Golden Globe last year for her portrayal of Cookie, and Cover Girl recently announced a makeup collection inspired by the hit show. These accolades offer further evidence of a cultural recalibration in which black voices increasingly are heard. That coincides with rising affluence and education levels, illuminated in the recently released report, “Young, Connected and Black: African-American Millennials Are Driving Social Change and Leading Digital Advancement.”

The 2016 Diverse Intelligence Series Report delves into the spending and viewing habits of African-Americans overall and quantifies their greater appetite for television content as one driver of the dramatic increase in diverse television programming. Between 2011 and 2015, broadcast network TV ad spend focused on black audiences (defined as ad dollars placed on programming with greater than 50% black viewers) increased by 255%.

About Nielsen
Nielsen Holdings is a global performance management company that provides a comprehensive understanding of what consumers watch and buy. Nielsen's Watch segment provides media and advertising clients with Total Audience measurement services for all devices on which content — video, audio and text — is consumed. The Buy segment offers consumer packaged goods manufacturers and retailers the industry’s only global view of retail performance measurement. By integrating information from its Watch and Buy segments and other data sources, Nielsen also provides its clients with analytics that help improve performance. Nielsen, an S&P 500 company, has operations in over 100 countries, covering more than 90% of the world’s population. For more information, visit http://www.nielsen.com.