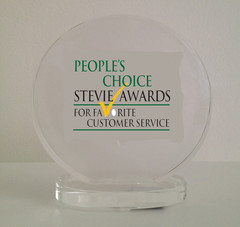 Winners of the 2017 People's Choice Stevie® Awards for Favorite Customer Service, a worldwide public vote, were announced today. Voting was conducted from January 20 through February 10, with the highest number of votes deciding the winners in 12 industry categories.

This year’s people’s choice winners, who will each receive the coveted crystal People’s Choice Stevie Award, are:

Nicknamed the Stevie® for the Greek word “crowned,” the awards will be presented to winners at the 11th annual Stevie Awards for Sales & Customer Service awards banquet on Friday, February 24 at Caesars Palace in Las Vegas, Nevada. Tickets for the event are now on sale. More than 600 executives from around the world are expected to attend. The presentations will be broadcast live via Livestream.