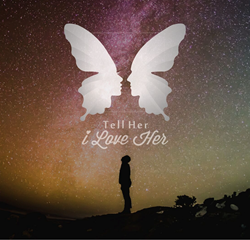 Tell Her I Love Her - Logo

“Powerful technology once reserved for animation and film studios is now accessible to everyone. Using breakthrough animation software like FlipaClip, anyone with a smartphone or tablet has the power to create something visually inspiring."

VisualBlasters, LLC, Miami-based maker of smartphone apps, today announced popular FlipaClip app will be available on the Apple App Store March 1, 2017. The action animation software - which has been downloaded 4 million times with 500,000 active monthly users on the Android platform -- puts the power of animation in the hands of anyone with a smartphone or tablet. As part of the iOS launch, the company is teaming with indie-band ‘Tell Her I Love Her’ to host a contest within the FlipaClip app, that gives users the chance to create an animated music video for the band’s first single, “Unravel”.

The “Animate ‘Unravel’ Contest” is open to Android and iPhone FlipaClip users from March 15th to April 26th. Judges for the “Animate ‘Unravel’ contest” were announced today including Grammy-winning animator, Michael Patterson, of iconic 80s animated “Take On Me” video for the band, A-ha, (https://youtu.be/djV11Xbc914) and Paula Abdul’s “Opposites Attract” video (https://youtu.be/xweiQukBM_k). Patterson teaches at University of Southern California’s Division of Animation and Digital Arts. Also judging will be Society of Voice Arts and Sciences and the Voice Arts Awards Co-founder Joan Baker with a third judge to be announced.

“We were approached by the ‘Tell Her I Love Her’ band with the idea of launching a contest using FlipaClip. We loved their music and have always been fans of animated music videos. It seemed a perfect opportunity to engage our users,” said Jonathan Meson, CEO/Founder of Visual Blasters, makers of FlipaClip. “FlipaClip puts the power of animation in the hands of millions. I fully expect the next major animator who works at Disney, Pixar or Microsoft Studios to be discovered in our user base -- maybe even this contest.”

“Powerful technology once reserved for animation and film studios is now accessible to everyone. Using breakthrough animation software like FlipaClip, anyone with a smartphone or tablet has the power to animate their ideas and create something visually inspiring.” said contest judge and “Take On Me” animator Patterson. “I am eager to see what styles of animation and interpretations of the song, ‘Unravel’, will come out of this contest!”

“Just as the Voice Arts® Awards created a recognition ceremony for top mainstream and industry talents in voice acting, FlipaClip empowers budding animators to share their art in the mainstream, quickly and visibly”, said Joan Baker. “Voice acting and animation go hand in hand and I am excited to see these artistic creations come to life before they are voiced.”

“This is an incredible opportunity to crowd-source our music video to a community of animators,” said ‘Tell Her I Love Her’ band manager Brian O’Shea. “We wanted to bring our music directly to consumers and were inspired by Michael Patterson’s A-ha video. FlipaClip provides an ideal platform to put our music in the hands of the masses. We’re excited to see what today’s animators will come up with for our song Unravel, using FlipaClip.”

Winners of the “Animate Unravel Contest” will be announced in New York City in May 2017. Awards include some $2,000 in cash prizes, as well as hundreds of free professional user versions of the software for the most stand-out submissions.

About FlipaClip
FlipaClip represents an entirely new category of shareable content for the non-professional but creative person. Available on Android and Apple app stores, FlipaClip provides the fastest route between a human and a cartoon, allowing you to relive your childhood and express creativity or professional skills in a cooler way. Draw your cartoon using frame-by-frame animation. It works just like the old school flipbook but with a modern twist.

About VisualBlasters LLC
In 2010, brothers Marcos and Jonathan Meson formed Visual Blasters to create intuitive apps that help people express themselves. The brothers combined programming and design skill created XiiaLive, the most stable and uninterrupted Internet radio app, rated in the top-100 in the GooglePlay Store with 5-million downloads. A year and half later, they launched FlipaClip, a flipbook style drawing and animation app for Android achieving a 4.3/5.0 star rating and more than 4,000,000 downloads. Visual Blasters delivers top quality apps that consistently rank among the best available for smartphone and tablet users. http://www.visualblasters.com

About Tell Her I Love Her
‘Tell Her I Love Her’ (https://www.tellheriloveher.com & https://youtu.be/bXNy3MW0JBY) is an indie Cross-Country/Pop-Rock band formed in Miami in 2016. Their first single, Unravel, is available Valentine’s Day 2017 and included in the FlipaClip App for the “Animate Unravel Contest.”