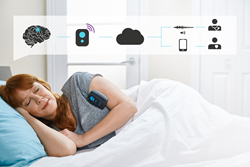 Harnessing the rich sEMG data through recording and in-depth analysis allows patients and their seizures to “speak” to physicians in a way not possible before.

Brain Sentinel, Inc. has received US Food and Drug Administration (FDA) de novo clearance to begin marketing the SPEAC® System, the Brain Sentinel® Seizure Monitoring and Alerting System. The adjunctive seizure monitoring system is indicated for adults at home or in healthcare facilities during periods of rest. A lightweight, non-invasive monitor is placed on the belly of the biceps muscles to analyze surface electromyography (sEMG) signals that may be associated with generalized tonic-clonic (GTC) seizures. It provides an alarm to alert caregivers of unilateral, appendicular, tonic extension that could be associated with a GTC seizure. The System records and stores sEMG data for subsequent review by a trained healthcare professional.

¨This is the first FDA-cleared non-EEG, physiological, signal-based system for seizure monitoring,¨ said Mike Girouard, President, CEO and co-founder of Brain Sentinel, Inc. ABPN board certified epileptologist, and Brain Sentinel co-founder, José E. Cavazos, MD, PhD, added, ¨There hasn’t been a reliable and easy way to gather accurate and comprehensive seizure data to help guide proper treatment. Physicians rely on patients or eyewitness reports which have been shown to be unreliable. The sEMG biomarker is an exciting breakthrough because it reflects the activity of the primary motor cerebral cortex.” Harnessing the rich sEMG data through recording and in-depth analysis allows patients and their seizures to “speak” to physicians in a way not possible before. Seizure data gaps that existed before can now be addressed with long-term sEMG monitoring that records the time, date, audio, and the length of the tonic and clonic phases of the marked sEMG events. The collection of sEMG and audio information during a potential GTC seizure event makes the SPEAC® System a bimodal tool which may help treating physicians improve the diagnostic characterization of the events as well as objectively monitor success in moving patients toward treatment goals.

According to the Epilepsy Foundation, three million Americans suffer from epilepsy and one in 26 people in the United States will develop epilepsy at some point in their lifetime. Approximately one-third of them do not have control over their seizures and another third can only partially control their seizures (Baker, 1997). Studies have shown that about 50% of seizures happen at night (Herman, 2001) and 86% of nocturnal seizures are not documented (Hoppe, 2001).

Girouard explained, ¨The risk to patients with epilepsy from nocturnal seizures is worrisome to the epilepsy community and that’s where the SPEAC® System can be particularly useful. Especially at night, patients may need additional monitoring to receive help right away. With Brain Sentinel’s SPEAC® System, physicians have a new tool to help get patient seizures under control. Finding a signal that can be easily monitored and is specific to these dangerous GTC seizures has eluded the epilepsy community for years.” Cavazos emphasized, “Validating surface electromyography (sEMG) as a medically useful biomarker for seizure monitoring represents one of the most significant breakthroughs in seizure monitoring since the launch of video EEG in the 1970s. The ability to harness the power of the sEMG biomarker provides the epilepsy community with a new avenue in monitoring when EEG is not feasible.”

Brain Sentinel, Inc. is a privately held medical device start-up based in San Antonio, Texas. The company will manufacture and market its sEMG-based System under the name of the SPEAC® System: the Sensing, Portable sEMG, Analysis and Characterization System. Brain Sentinel is committed to helping people gain better control over their seizures and be heard by their physicians.