Author Jim Griffith‘s Newly Released “Sector Six” is a Futuristic, Post-apocalyptic Novel Inspired by the Holy Spirit to Shed Light on the Importance of the Family Unit

“Sector Six” from Christian Faith Publishing author Jim Griffith is a gripping story of a man and his family struggling to survive in a dark and post-apocalyptic world. Do they break the law to help a young man running from the patrols in an attempt to rescue his father and reach freedom, or do they conform to the rules of their imprisonment and keep themselves safe? 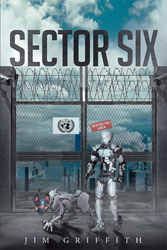 “Sector Six”: a suspenseful tale of family loyalty and the quest for freedom from oppression. “Sector Six” is the creation of published author Jim Griffith, a young Born-again Christian with a passion for writing and sharing the glory of God with others.

Published by Christian Faith Publishing, Jim Griffith‘s new book introduces Daniel, who lives with his family in a post-apocalyptic nightmare world of darkness and nuclear radiation.

Everyone living in Sector Six is led to believe the Great War has destroyed one-third of the population, and the effects of radiation are affecting some more than others. The UN has taken full control of what used to be the United States and Daniel dreams of the freedoms he and his wife once enjoyed. He manages to create a world beyond these fences, where he can escape now and then. Deep down inside, he longs for freedom and is offered the chance to act on it when he encounters a young man running from the patrols. Daniel has to decide if he’ll help, because he knows the consequences for such actions. His conscience won’t allow him to turn this young man away, so he hides him. The teen’s name is Sean, and he’s looking for his father, whose been transferred here to work in the wastelands of Sector Six. Sean comes with a plan. He wants to find his father and help him escape to a free zone, which is what used to be called Alaska. Sean invites Daniel and his family to join him and his father. A plan is devised and involves first trying to escape Sector Six. If they can evade the cyborgs and androids, they just might have a chance.

Readers can purchase “Sector Six” at traditional brick and mortar bookstores, or online at Amazon.com, Apple iTunes store, Kobo or Barnes and Noble.

For additional information or inquiries about “Sector Six”, contact the Christian Faith Publishing media department at 866-554-0919.