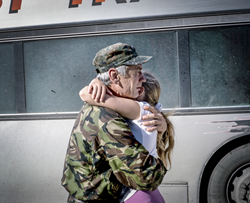 Justyna Mielnikiewicz received the 2016 Smith Grant for, A Diverging Frontier: Russia and its Neighbors, which explores how Soviet Republics are still looking to break away from Russian influence.

The W. Eugene Smith Fund announced it is now accepting applications for its 38th annual Grant in Humanistic Photography. Since presenting its first grant in 1980, the Fund has awarded more than one million dollars to exemplary photographers whose works, created in the tradition of Eugene Smith, have brought light to contemporary issues that call for compassion and attention. The Smith Fund also announced it will increase its annual grant to $35,000, beginning this year. Photographers interested in learning more about the grant and fellowship, and submitting an application should visit SmithFund.org. The deadline for submitting applications is May 31, 2017.

About The Smith Fund Grant
The Grant is presented annually by The W. Eugene Smith Memorial Fund to photographers whose work is judged by a panel of experts to be in the best tradition of highlighting untold stories, as exhibited by W. Eugene Smith during his 45-year career in photojournalism. The grant, which honors the legendary photo-essayist, enables recipients to undertake and complete their proposed photojournalistic and documentary projects. Past recipients have included Sebastião Salgado, Eli Reed, Matt Black, Donna Ferrato, Lu Guang, and James Nachtwey.

“We continue to be overwhelmed and inspired by the quality of work submitted by photographers all over the world in the name of humanistic photography,” said Lauren Wendle, president of the Fund’s Board of Trustees. “Last year’s recipient, Justyna Mielnikiewicz, is a great example of the quality of work being submitted and the significance the Smith Fund has established internationally.” In A Diverging Frontier, Justnya looks at Russians living in the former soviet states, 25 years after the fall of the Soviet Union, and the role ethnicity plays in the political development of these countries and the formation of social identity.

The recipient of the 2017 Smith Award will receive a $35,000 grant to complete a current or future documentary project. In addition, one or more Fellowships totaling $5,000 will be given to photographers to fund worthy projects.

Each year, the Board of Trustees appoints a three-member international jury that meets twice during the adjudication process. Finalists are selected based on the substantive, photographic, and intellectual merits of their project. They are then asked to submit a comprehensive electronic portfolio, and write, if necessary, a more detailed and focused proposal to answer questions by the jury regarding their project.

The 21st Annual Howard Chapnick Grant
Applications for the annual Howard Chapnick Grant are also open through May 31, 2017. The grant is presented to an individual for his or her leadership in any field ancillary to photojournalism, such as picture editing, research, education and management. This grant is not intended for photographers, but for champions of photography. It was established in 1996 to honor the memory of Howard Chapnick who led the Black Star photo agency, and to acknowledge his enormous contribution to photography. The annual $5,000 grant may be used by the recipient to finance a range of qualified undertakings, which might include a program of further education, special research, a long-term sabbatical project, or an internship to work with a noteworthy group or individual. This grant is not for the creation or production of photographs.

“Awarding these grants each year is made possible through industry-wide support and by private donors,” Lauren Wendle explains. “As it is important that we continue the funding which allows these photographers to share their stories with the world, we invite any who are philanthropically minded and share our interest in this special form of photography, to contact us. The W. Eugene Smith Memorial Fund is a not-for-profit corporation qualified under Section 501(c)(3) of the Internal Revenue Code. Contributions to the Smith Fund are tax-deductible.”

Each year, the Smith Fund hosts an award ceremony in New York City and invites the grant recipient to attend, at the Fund’s expense. This year’s event will be held at the SVA Theater in New York on Wednesday, October 18.

Youth play at Hydropark city beach on Dnieper River. The Kiev metro station connects Hidropark Island to the city and transformed the island to a summer resort for Kievans. © Justyna Mielnikiewicz