Human Appeal has collected and distributed more than 1,500 winter clothes for the homeless this winter in a drive to provide warmth for those sleeping rough in the streets of Manchester. 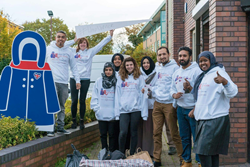 Whether it’s a besieged city in Syria or the growing number of homeless people in our home city of Manchester, Human Appeal aims to help in every international humanitarian crisis

The award-winning Wrap Up Manchester campaign was launched in October 2016 by the Cheadle-based humanitarian charity, Human Appeal, which called on members of the public to donate their unwanted winter clothing to those in need.

Human Appeal members got out on the streets to give out the donated clothes to homeless shelters, elderly organisations, women’s refuges, children’s centres and other charities.

The campaign’s success was instrumental to Human Appeal receiving the prestigious Charity of the Year award at the British Muslim Awards 2017.

In Britain, there are over 4,000 people sleeping rough on any given night. In Manchester nearly twice as many people slept rough in 2016 than in the previous year.

Human Appeal worked in partnership with Hands On London, an organisation that has organised a similar campaign, Wrap Up London, in the capital for six years.

Members of the public could drop off their donations at one of nine locations across Greater Manchester, which were provided free by Safestore Self Storage. Those wishing to get involved from further afield could receive a free postal label from the service CollectPlus.

This is the first year of Wrap Up Manchester, and Human Appeal now hopes to conduct another, larger campaign next winter. Wrap Up Manchester was the brainchild of Samra Said, Human Appeal’s UK Project Coordinator, who explained: "Potentially, those of you who have donated a coat haven’t just warmed a soul, but you could have changed a life too.”

Human Appeal CEO, Othman Moqbel, said of the Wrap Up Manchester Campaign: “Human Appeal helps people in need all across the world, Asia, Africa and here in the UK. Whether it’s a besieged city in Syria or the growing number of homeless people in our home city of Manchester, Human Appeal aims to help in every international humanitarian crisis.

2016 marked Human Appeal’s 25th anniversary and a year which saw the charity collect £30 million in donations, the highest annual total ever. On top of that, Human Appeal delivered £20 million worth of aid in Syria from institutional donors, such as UNOCHA and the World Food Programme.

The Wrap Up Manchester campaign received cross-party support from political leaders across the city with Labour MPs Jim McMahon OBE and Kate Green and Lib Dem Manchester Mayoral Candidate Cllr Jane Brophy donating coats and throwing their support behind it.

For more information contact Charles Lawley on 07983 504 243, or charles.lawley(at)humanappeal(dot)org(dot)uk