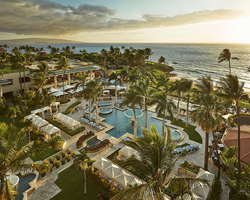 General Manager Jean Claude Wietzel says “it is thanks to our employees’ commitment to the highest levels of service excellence, dedication and purpose that this recognition is possible.”

Four Seasons Resort Maui has been awarded the Forbes Five Star every year since the inception of the property in 1990 and is the only Maui resort to hold the Forbes Five Star as well as the AAA Five Diamond and the TripAdvisor Certificate of Excellence. The recent renovation of the resort is a testament to the resort team’s commitment to maintaining the highest standards of design and comfort, and to continually looking forward. This year Four Seasons Resort Maui at Wailea announced the completion of a floor-to-ceiling transformation of its luxury guest rooms, suites and beyond. The project was quietly set in motion in December 2014, when a hand-selected group of executives gathered for a design review of the legendary resort. The group reimagined every detail of the property, redefining the luxury guest experience for today’s most discerning travelers. Almost two years later, the transformation is complete, and Four Seasons Resort Maui has emerged an even better place to see, be seen and be unseen. General Manager Jean Claude Wietzel says “it is thanks to our employees’ commitment to the highest levels of service excellence, dedication and purpose that this recognition is possible.”

Star ratings are awarded by a team of anonymous professional inspectors. In the words of Forbes Travel Guide, its inspectors “travel the world to assess hotels, restaurants and spas against up to 800 objective standards.” Star ratings ultimately emphasize quality of service. Five-Star properties are defined as “outstanding, often iconic properties with virtually flawless service and amazing facilities.” Forbes Travel Guide rates properties in 42 countries throughout the Americas, Europe and the Asia-Pacific region, with plans to add the Middle East and Africa in 2018. Forbes Travel Guide plans to formally bestow the ratings at a Five-Star Awards Ceremony and Banquet in New York City on March 1.

About Four Seasons Resort Maui: Maui's celebrated Forbes Five-Star resort is nestled on 15 acres of the breathtaking Wailea Coast.  The 383-room oceanfront property is world-renowned for its comfortable opulence, impeccable service, luxurious amenities and for living in harmony with its environment and community.  A TripAdvisor Certificate of Excellence Hall of Famer, the resort in Maui is also home to one of the nation's top-rated spas committed to wellness and three of Hawaii's most acclaimed restaurants—Ferraro's Bar e Ristorante, Spago Maui and DUO, a premium steak and seafood restaurant. This sophisticated home away from home caters to the needs and interests of all generations—offering redesigned guestrooms and suites (November 2016) featuring contemporary art, world-class activities with no Resort fee and one-of-a-kind Unforgettable Experiences, a museum quality art collection, three pools overlooking the azure-blue Pacific Ocean including an adults-only Serenity Pool with exclusive Missoni-designed cabanas, and more.  Four Seasons Resort Maui is a Hawaiian vacation destination geared to action adventurers, those guests wishing to practice the fine art of doing nothing at all, and everyone in between.