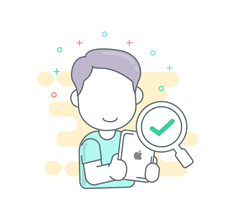 "As someone with several years of experience in school web-filtering, I can attest to the pain involved in deploying a viable filtering solution for iPads. We're extremely pleased to make this easy to deploy option available to our school IT admins."

Securly, Inc. – the world's leading cloud-based provider of Internet security for K-12 schools – today announced the availability of a DNS based solution for iPad filtering.

iPads have a prominent place in the K-12 ecosystem. While higher grades normally use Chromebooks as the 1:1 device of choice, lower grades typically go with iPads due to its tactile interface. Educational apps minimize the need to type while fostering learning. With many schools choosing to send these devices home, both the CIPA law and pressure from the local parent community forces schools to provision their iPads with some form of filtering. Apple's architectural limitations have thus far allowed only two options - Safe customer browser alternatives to Safari, and Web-filtering Global HTTP Proxy setting on the iPad. Both of these have their own limitations.

Safe custom browsers by definition rule out the use of Safari. Given that most Edu apps including the most popular ones used with G-Suite use Safari to open links on the iPad, this constraint causes irreparable damage to the device's viability as an educational platform. The only other choice was a Global HTTP Proxy setting that was pushed out via MDM. This option too has a number of pitfalls including the need to whitelist proxy IPs on the school's Firewall and the need to route students' home traffic back into a hardware appliance based on the school's network.

Recent advances in iOS 10 have enabled Securly to filter iPads that leave the school's network with a simple DNS setting.

Up until now, DNS based web-filtering worked well on take-home Apple Macbooks and Microsoft Windows tablets & laptops, but there was simply no way of making the DNS settings stick across Wifi and LTE networks on the iPads. Through months of R&D effort, Securly has invented a mechanism that allows DNS settings to be made sticky across school, home, coffeeshop Wifi networks and even on the local LTE data network. Says Robert Saiter, an iOS researcher and a K-12 web-filtering veteran, "As someone with several years of experience in school web-filtering, I can attest to the pain involved in deploying a viable filtering solution for iPads. We're extremely pleased to make this easy to deploy option available to our school IT admins."