Hepatitis Zero Expedition; More Than Just A Round The World Trip

The social expedition Hepatitis Zero, has the aim of eradicating the disease globally and will arrive in the USA today. 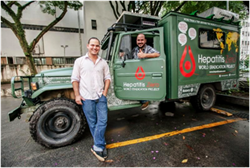 We are making people more aware about viral hepatitis, one of the biggest global health problems, which kills twice as many as AIDS and our work will be that of a social project, showing that with early diagnosis it is possible to treat and even eradicate.

The social expedition that is on the road taking with it the message of the international campaign Hepatitis Zero, that has the aim of eradicating the disease globally, will arrive in the USA today.

Two brothers, a car, one important social cause, a lot of courage and many adventures on the way; this is how the Hepatitis Zero Expedition will travel the world. Fred Mesquita and José Eduardo Rossi decided to realize a dream together and see the world in a different way: spreading information about Hepatitis and showing how it can be prevented as part of a Rotary campaign which aims to eradicate the disease that affects at least 400 million people around the world.

On board their car, a Toyota Land Cruiser, nicknamed “Carona” (ride), Fred and José will act as ambassadors of the Hepatitis Zero project. They will spend almost four years traveling the five continents, covering almost 112,000 miles in fifty countries.

"Our proposal is to go beyond just a round the world trip; what is important is the meaning behind that journey. We are making people more aware about viral hepatitis, one of the biggest global health problems, which kills twice as many as AIDS and our work will be that of a social project, showing that with early diagnosis it is possible to treat and even eradicate the disease," says Fred, 31, who is trained in performing arts and is already an experienced traveler.

As they get to know new cultures, see remote landscapes, and live an astonishing adventure, the Hepatitis Zero brothers will work together with local Rotarians to help identify potential Hepatitis C virus victims and give advice to them about the disease and how to find treatment. "Worldwide, there are already more than 400 million people who have Hepatitis B and C. The World Health Organization estimates that only 5% of these have been diagnosed and that more than 80% of severe cases of liver disease such as cirrhosis, cancer and even organ transplants occur as a consequence of Hepatitis B or C," explains José, 34, a graduate in agronomy and a fan of new technology.

Hepatitis C can be fatal, but if diagnosed in time, the sufferer can be 100% cured, In the cases of Hepatitis A and B there is a vaccine for prevention of the disease and medicines for a cure.

Campaign Founder
Suffering from a asymptomatic virus and unaware that he was close to death, Humberto Silva, the founder of the campaign, was inspired by his own experience of being a victim of the disease called "the silent killer."

The 52 -year- old Brazilian discovered that he was infected by chance, when his doctor prescribed routine clinical exams. Thus, after 38 years carrying the virus without having the slightest idea of its existence, Humberto was diagnosed with cirrhosis, starting from that moment the fight that enabled him to escape death following a long, tortuous battle.

Silva, who is now 100% cured, made the vow to God to "work until the end of his days" to radically change the situation of Hepatitis globally.

Fred and his brother together with the founder of this great campaign, will reach the United States, after traveling over forty thousand miles through much of Brazil, Uruguay and the main cities of Argentina, Chile, Peru, Ecuador, Colombia, Panama, Costa Rica, Nicaragua, Honduras, Guatemala, Belize and Mexico.

Reports from around Latin America: https://goo.gl/uUmaSW