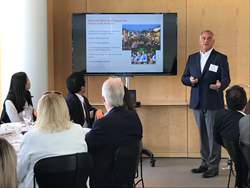 Yesterday, Suzhou Tourism hosted more than 40 of the most influential members of the Los Angeles travel trade community at a private luncheon held at The Getty Center. The event was tied to Suzhou Tourism’s current social media program – “A Curated Look at Suzhou's Arts & Culture - No Visa Required” – which directly targets North American travelers.

During the afternoon gathering, Suzhou Tourism educated travel agents and tour operators about the “Venice of the East” and engaged them in the destination’s story through a series of interactive social media activities such as Facebook Live and Instagram Stories. Among the key takeaways for the group was an update on the city’s booming hotel construction, fueled by the growth of Suzhou’s local economy and tourism products. New properties scheduled to open in the next two years include the W Suzhou, opening June 2017; The Westin Suzhou Xiangcheng, opening June 2018; and The Fairmont Suzhou, opening late 2018. These openings follow the launch of several hotels in Suzhou since 2014 such as China’s first Wyndham Garden®, Novotel Suzhou SIP, Element Suzhou – the first Element-branded property in Asia-Pacific, and Hotel Nikko Suzhou.

About Suzhou
Suzhou, the "Venice of China," is known for its elegant stone bridges, canals, flowing water, and noteworthy architecture. Located in the center of the Yangtze River Delta, approximately 60 miles west of Shanghai, Suzhou is one of the oldest cities in the Yangtze Basin dating back more than 2,500 years. The city boasts the beautifully manicured Classical Gardens of Suzhou, many of which have been designated a UNESCO World Heritage Site. Each year, millions of tourists travel to Suzhou to experience the destination’s more than 400 attractions, ranging from pagodas and temples to historical districts and world-class museums. As the largest industrial city in China, Suzhou continues to develop, such as the Suzhou Industrial Park (SIP), which boasts five-star hotels, the iconic Lake Jinji, and Asia’s largest over water Ferris Wheel.