Embracing our differences is an important part of removing barriers and creating opportunities for Horizon Goodwill. 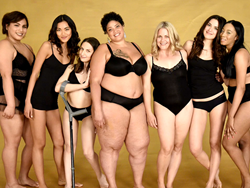 Horizon Goodwill CEO, John McCain, said, “We couldn’t be more pleased with this type of partnership. We enjoy working with other organizations that speak to the younger generation in current and creative platforms."

The sixth annual Maryland International Film Festival, Hagerstown (MDIFF-H) is hosting over 100 films this year from around the world. The festival kicks off on March 30, 2017, and runs through April 2, 2017. Executive Director, Tracie Hovey, said, “It is part of our mission to screen films that make a difference in the lives of people and screen movies that give us an opportunity to help the community as well. The film “Embrace” has a beautiful message about embracing your body no matter your weight, your physical disability, or your gender. It fits with Goodwill’s commitment to remove barriers and create opportunities like the barriers of societal judgment, so you have the chance to be who you want to be.”

Horizon Goodwill CEO, John McCain, said, “We couldn’t be more pleased with this type of partnership. We enjoy working with other organizations that speak to the younger generation in current and creative platforms. It gives us new ways to get our message to the community, and it ignites new friendships.”

The screening of Embrace takes place Saturday, April 1, at 7:30 pm at the Academy Theater. Actress Ann Mahoney from The Walking Dead and Sun Records will be at the screening to host the Q & A. Catharine Fleming, director of Mission Services, will also be a part of the Q & A session following the screening. Before the screening, everyone is invited to an Embrace celebration at Bulls and Bears. The pre-party starts at 5:00 pm and ends at 7:00 pm so everyone can attend the movie screening. After the film, there will be an after party at The Gourmet Goat with live music, food, and drinks.

The Maryland International Film Festival – Hagerstown is a 501(c)3 non-profit organization and is organized by filmmakers and marketing executives who understand the power of film and support the talent of the independent filmmaker. One of the film festival’s goals is to encourage the development of filmmaker networks including media, distribution and the association with other artists. MDIFF - Hagerstown, believes in the importance of giving back to the community and donates a portion of the proceeds to charities around the globe.
###