Diablo Magazine interviews Congressman Mark DeSaulnier regarding the challenges and opportunities facing his district and the country. 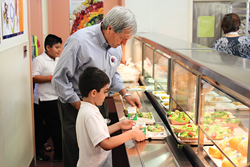 Courtesy of the Office of Congressman Mark DeSaulnier

We wanted to let our readers know about what’s happening in Washington, D.C., from someone like Congressman DeSaulnier.

Congressman Mark DeSaulnier discusses the challenges and opportunities facing his district and the country in the April issue of Diablo magazine. DeSaulnier spoke with editor Casey Cantrell about the partisan gridlock on Capitol Hill, his decision to not attend President Trump’s inauguration, and his hopes for what Democrats and Republicans can do to move the country forward.

Congressman DeSaulnier, who recently began his second term representing California’s 11th congressional district in Washington, D.C., was a successful East Bay restaurateur for many years. The interview is a candid discussion about the unique political climate facing the country as well as how DeSaulnier hopes to work with Republicans in Congress.

While Diablo magazine is primarily known for covering East Bay lifestyle and culture, Cantrell saw a crucial opportunity to see how local representatives were faring with the new administration. “We felt it was important to not shy away from covering politics,” says Cantrell. “We wanted to let our readers know about what’s happening in Washington, D.C., from someone like Congressman DeSaulnier.”

Read the full interview and find a listing of ways to contact Congressman DeSaulnier on diablomag.com.

About Diablo Magazine
Covering topics ranging from travel, culture, and personalities to entertainment, recreation, and food, Diablo magazine is written specifically for the San Francisco East Bay market—from Central Contra Costa, into the Oakland and Berkeley hills, and throughout the Tri-Valley. With locally driven editorial content, beautiful photography, and resource listings, Diablo is a unique celebration of the San Francisco East Bay. Published since 1979, Diablo has been recognized for its editorial and design with numerous awards, including previous Maggie Awards for Best Overall Publication and Best Regional and State Magazine in the consumer category.