Barbara Tyler Ahlfield, one of America’s award-winning and leading female fashion illustrators, launches a new gallery at Artexpo New York, 2017 showcasing a dynamic collection of new paintings called, "Mood." Barbara's recent fashion oil paintings of people and their pets strive to exemplify the important bond that people have with animals and thus drive attention to the needs of animal welfare. 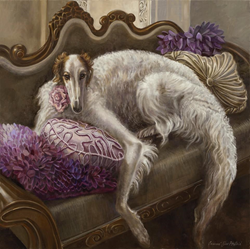 I am inspired by the natural grace inherent in our animal companions and seek to portray the special and elegant bond between human and animal. Drawing attention to this connection has allowed me to be part of a larger mission to improve animal welfare.

Award-Winning American Female Fashion Illustrator, Barbara Tyler Ahlfield is returning to New York Artexpo, 2017 with her Gallery Exhibition, "Mood". This is Barbara's fourth show at Artexpo and marks the debut of her Gallery's exhibition which is dedicated to the portraiture of people and their pets.

Since being awarded one of Art Business New's Top Emerging International Artists of 2014 following her last exhibitions at Artexpo New York in 2013, 2014 and 2015, Barbara's work has traveled internationally. Her work was shown at Art Hamptons New York, 2015 & 2016, Art San Diego 2016 and has shown in Art Blend Gallery in Miami, Musings Fine Art Gallery in San Francisco and Rosenteils Gallery in London which features Barbara's work as fine art fashion prints in 100 countries.

Barbara's recent collections have focused on large oil paintings of fashionable people with their fashionable pets which have been featured in Hampton's Pet Magazine, Bark & Swaggar Radio Show, Art Blend Magazine and have taken a philanthropic showing at many animal rights fundraisers in order to drive donations for improving the welfare of animals. Barbara is a board member of Pet Philanthropy Circle, (a national organization with the mission to help protect the welfare and save the lives of animals). Additionally, she has made donations of her work at The Algonquin Hotel in Manhattan, Pet Hero Awards 2015 and 2016 in New York, the 2015 Search Dog Foundation in Washington, DC, and the 2014, 2015 and 2016 Borzoi Club of America. Barbara says, "I am inspired by the natural grace inherent in our animal companions and seek to portray the special and elegant bond between human and animal. Drawing attention to this connection has allowed me to be part of a larger mission to improve the welfare and save the lives of our animal companions."

Her newest collection, "Mood" will debut at Artexpo New York, 2017 in the Contemporary Gallery section. This collection incorporates 12 large oil paintings which include pet philanthropists, breeders and enthusiasts. The collection captures a spectrum of moods of fashionable people with their fashionable pets. "Mood" is expressed through the relationships that people have with their pets and the evocative moods that come from those special connections. Barbara says, “There is an undeniable nexus between people and their pets and how the two tend to mirror each other in attitude and style.” The collection can be viewed at booth #349 at Artexpo New York, 2017 on April 21st-24th at Pier 94, 711 12th Ave., New York, New York 10019.

About Barbara Tyler Ahlfield:
For more information on Barbara Tyler Ahlfield and her illustrations, please visit: http://www.barbaratylerahlfield.com.
Barbara started drawing at the age of two and was soon decorating her bedroom walls with crayon fashion drawings. As a child, she was fascinated with the glamorous fashion she saw in vintage black and white films on Television as well as the formal portraits she studied during children’s classes at the Rochester Memorial Art Gallery. Following college, she united her loves of art and fashion into a career that spanned 30 years as one of the leading, female American award winning retail fashion illustrators in the United States.

The archive of Barbara’s illustrations is one of the few existing collections of American fashion illustration over the last quarter century and offers a retrospective of the American woman’s changing sense of style as well as changing illustrative styles. Her full-page illustrations appeared in many of the major newspapers in the country including the New York Times, Chicago Sun Times, Washington Post, Philadelphia Inquirer, etc. showcasing top American fashion designers for the major US department stores such as Lord and Taylor, Nordstrom, Dillards, John Wannamaker and many more.

In 2014, Barbara was featured as one of "The Top 50 Emerging International Artists" in Art Business News for her recent fashion oil paintings and transition to fine art. She will be exhibiting at Artexpo New York, 2017 showcasing her collection of Fashionable People & Fashionable Pets in her newest collection, "Mood".

SVORA BORZOI BABSA well-known breeder of borzoi dogs is featured with three generations of her fabulous hounds.The breeder’s elegant attire is matched by the innate high-fashion of the hounds. The mood of fantasy is enhanced by the silver leashes.

MIMIThe natural beauty of the cat is enhanced by an elegant and formal fashionable tulle ruff. The mood is serious and contemplative with an autumnal palette.