Author Jeff Janes’s newly released “I Said, Not Now” is Chris Brownstein’s quest to restore the Tree of Life to God’s Chosen People.

“I Said, Not Now” from Christian Faith Publishing author Jeff Janes is the story of Chris Brownstein and his quest to finish the work of his father. In solving a mystery of modern medicine, Christ will learn to restore the Tree of Life to God’s Chosen People. 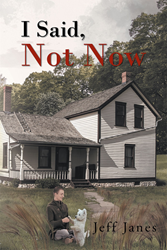 “I Said, Not Now”: the quest to restore the Tree of Life to God’s chosen people. “I Said, Not Now” is the creation of published author, Jeff Janes, a native of Ovid, Michigan who was born in Flint, Michigan. Jeff Janes grew up as the fourth of six children in a Christian home. After graduating high school, he joined the USAF and served twenty years in aircraft maintenance. In 1989, while working a twenty-four hour shift on F-15 alert duty at Bitburg AFB in Germany, Jeff had a very sleepless night. It was then that this story came to him as he pondered about the Tree of Life and its function in God’s plan to grant eternal life to his chosen.

“Getting lost in his research Chris leans back in the chair about 01:00 A.M. to rest his eyes. About the same instant he hears a soft voice over his right shoulder say his name….. Chris…. Startled beyond belief and with his heart pounding out of his chest he turns in the direction of the voice. There in the shadows of the corner of the attic is a tall figure of…. something? Much too large to even fit into the height of the attic ceiling but how could this be? Bewildered he tries to make sense of his condition! Am I sleeping, is this real, what in God’s name he only thinks to himself when the same voice answers. GOD’s name…. exactly right! The angelic being or whatever it is, remains not totally visible to his perception. From this encounter, Chris receives a warning not to pursue or seek after his father’s research. The entity declares, “For it is not given unto man to obtain this knowledge until the appointed time”. -Jeff Janes

Published by Christian Faith Publishing,Jeff Janes’ new book is an adventure that twists the mysteries of modern medicine and the faith of God’s Chosen People.
CFP Website Link:
http://www.christianfaithpublishing.com/books/?book=i-said-not-now

For years, medical researchers have debated the function of the appendix. Some have searched for a reason as to why humans even have the mysterious organ. Only God knows the true purpose for its existence.

“I Said, Not Now” is the story of a young man named Chris Brownstein and his quest to uncover the secrets of his late father’s work. His father wanted to restore the Tree of Life to God’s Chosen People. Chris will finish his father’s work and cement his legacy.

View a synopsis of “I Said, Not Now” on YouTube.

Consumers can purchase“I Said, Not Now” at traditional brick & mortar bookstores, or online at Amazon.com, Apple iTunes store, Kobo or Barnes and Noble.

For additional information or inquiries about “I Said, Not Now”, contact the Christian Faith Publishing media department at 866-554-0919.