Author Lee Halverson’s Newly Released “Cong Catchers; A Soldier's Memories of Vietnam” is a Detailed Memoir of Life in Combat while Trying to Make it Home Alive

“Cong Catchers; A Soldier's Memories of Vietnam” from Christian Faith Publishing author Lee Halverson recounts the experiences of the author as he served in the US Army during the Vietnam War as a Military Police dog handler. This memoir recounts the life of soldiers in a combat zone as they served their County with honor and valor. 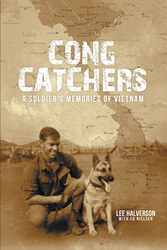 “These young men served their country with valor and honor only to return home to a less-than-friendly society.” -- Lee Halverson

Published by Christian Faith Publishing, Lee Halverson’s new book recounts the daily thoughts and experiences of a soldier and his brothers in arms serving their country and trying to make it home alive.

Lee Halverson served in the US Army from January 1969 to December 1970. “Cong Catchers” is a compilation of events that occurred while he served in Vietnam. This is not a guns-and-ammo book. It is a book about a young man with Christian values at war.

This is the story of a young man who avoided the pleasures that were readily available and instead organized football games, drank soda, avoided drugs, and helped repair orphanages. Meet those he served with and the ways they coped in very adverse conditions.

View a synopsis of “Cong Catchers; A Soldier's Memories of Vietnam” on YouTube.

For additional information or inquiries about “Cong Catchers; A Soldier's Memories of Vietnam”, contact the Christian Faith Publishing media department at 866-554-0919.