A demonstration of the Mako Robotic-Arm Assisted Surgery System's capabilities will be shown live on Overlook's Facebook Page on April 13. 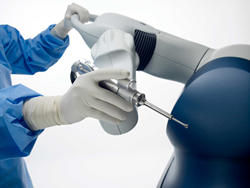 As the surgeon uses the Mako system's robotic-arm, its tactile, auditory and visual feedback limits the bone preparation to the diseased areas and provides for real time adjustments and more optimal i

“Mako gives us the ability to better plan the patient’s surgery, make more precise cuts in the bone and make a much more accurate fit with an implant." - Jeff Leary, MD, Overlook Medical Center surgeon

Designed to treat adults living with mid-stage osteoarthritis (OA) that has not yet progressed to all three compartments of the knee, the Mako System enables the surgeon to complete a patient-specific pre-surgical plan that details the technique for bone preparation and customized implant positioning using a CT scan of the patient’s own knee.

The first procedure using the Mako System at Overlook Medical Center was performed in early January on a 57 year-old man from Roselle. Jeff Leary, MD, the board-certified orthopedic surgeon who performed the procedure, said the Mako system made the partial knee replacement far more precise, and he anticipates better patient outcomes.

“Precision is key in planning and performing partial knee surgeries. For a good outcome you need to align and position the implants just right,” Leary said. “Mako gives us the ability to better plan the patient’s surgery, make more precise cuts in the bone and make a much more accurate fit with an implant. Using robotics, we are able to restore normal alignment to the arthritic knee with incredible accuracy. With more accurate alignment, the implant is expected to last longer, allowing patients to enjoy a better quality of life and return to their regular activities sooner.”

During the procedure, the system creates a three-dimensional, virtual view of the patient’s bone surface and correlates the image to the pre-programmed surgical plan. As the surgeon uses the robotic-arm, its tactile, auditory and visual feedback limits the bone preparation to the diseased areas and provides for real time adjustments and more optimal implant positioning and placement for each individual patient.

“Like having a robotic assistant, Mako helps the surgeon to adhere strictly to the prepared surgical plan, preventing unwanted deviations that could affect the outcome of the surgery,” Leary noted. “However, the surgeon retains ultimate control and can still make adjustments as needed.”

Being more precise also allows the surgeon to preserve more of the patient’s own bone and tissue, which would benefit further surgeries if needed.

The opportunity for early intervention is important as OA is the most common form of arthritis and a leading cause of disability worldwide, according to the American Academy of Orthopaedic Surgeons.

Overlook Medical Center was recently recognized as one of ‘America’s 100 Best Hospitals’ for clinical excellence, as well as recognized with the 2017 Distinguished Hospital Award for Clinical Excellence™, both by consumer rankings group Healthgrades.®

Atlantic Health System was recently recognized among Fortune’s “100 Best Companies to Work For®,” ranking number 46 in its ninth consecutive year on the prestigious annual list.