Mediaplanet’s new “Diversity & Inclusion” campaign helps generate a much-needed conversation on inclusion. In collaboration with leading national organizations including the American Indian College Fund, this campaign will educate and empower Americans to join the conversation about diversity and inclusion in education and other communities. 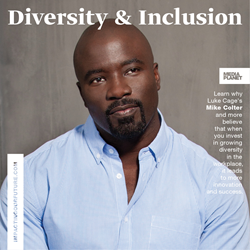 According to a 2015 Equal Employment Opportunity study, less than one percent of jobs in nine out of 10 employment categories are held by American Indians, and only 13.6 percent of American Indians hold college degrees. President and CEO for the American Indian College Fund, Cheryl Crazy Bull, a contributor to the “Diversity & Inclusion” campaign, says that investing in American Indian education beginning in or before high school can help develop a pipeline of potential Native American employees.

The print component of “Diversity & Inclusion” is distributed within Thursday’s edition of USA Today with a circulation of approximately 250,000 copies with an estimated readership of over 750,000. The digital component is distributed nationally through a vast social media strategy and across a network of top news sites and partner outlets. To explore the digital version of the campaign,click here.

About Mediaplanet
Mediaplanet is the leading independent publisher of content marketing campaigns covering a variety of topics and industries such as Health, Education, Lifestyle, Business and Technology, and Corporate Social Responsibility. We turn consumer interest into action by providing readers with motivational editorial, pairing it with relevant advertisers and distributing it within top newspapers and online platforms around the world. Please visit http://www.mediaplanet.com for more on who we are and what we do.