Save the Cat!® Goes to the Indies: The Screenwriter's Guide to 50 Films From the Masters

Based on best-selling Save the Cat! series of books and software, new book analyzes 50 beloved independent films. 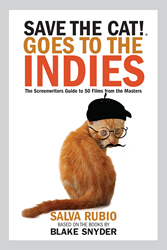 Save the Cat! Goes to the Indies: The Screenwriter's Guide to 50 Films From the Masters Based on the Best-Selling Save the Cat! Series of Books on Writing

Saving the Cat! principles are for writing good stories, period, no matter if the film is auteur, independent, or from a major studio with a giant budget. - Salva Rubio, Author

Blake Snyder Enterprises, LLC and Save the Cat!® Press announce the publication of Save the Cat!® Goes to the Indies: The Screenwriter’s Guide to 50 Films From the Masters ($21.95), written by Salva Rubio, the fifth book from the best-selling Save the Cat! series. The new book breaks down 50 celebrated independent films based on Blake Snyder’s Save the Cat! The Last Book on Screenwriting You’ll Ever Need (Michael Wiese Productions, 2005), now in its 33rd printing and translated into eight languages.

Writers of any kind including novelists and screenwriters, regardless of professional status or experience, are guided through the story process as Rubio breaks down story beats from favorite independent films like The Reader, The Blair Witch Project, Pi, The Full Monty, The 400 Blows, The Big Lebowski, Amelie, Boogie Nights, Little Miss Sunshine, Her, Lost in Translation, The King’s Speech, Cinema Paradiso and more.

Blake Snyder (1957-2009) wrote the first three Save the Cat!® books, and was considered one of Hollywood’s most influential storytelling experts among studio executives, agents and filmmakers. Snyder was a screenwriter himself who sold 13 spec scripts, and the ultimate insider and writers’ friend. He coined the breakthrough phrase, “save the cat” when he discovered the obligatory scene where an audience meets the hero who does something nice -- like saving a cat -- that makes him or her endearing. This ritualistic moment that comes early in any story, when the audience "steps into the hero’s shoes,” is the single most important element found in everything from Bible stories to TV commercials according to Snyder.

Salva Rubio, Snyder’s former student who wrote the Save the Cat! Goes to the Indies book, first took Blake Snyder’s screenwriting workshop in Spain in 2007, and went on to work as a professional screenwriter, published graphic novelist, essayist, and script doctor.

“Before deciding to become a professional screenwriter, I realized that the best scripts and the most successful, most popular and moving films follow the Save the Cat rules,” says Rubio, who as a 10-year story analyst would regularly read scripts from some of the most famous screenwriters including the Coen Brothers, Eric Rohmer, Gus Van Sant and David Cronenberg.

“I’m a big believer in Blake’s approach because everything he taught was proven true in my own work,” says the Madrid-born Rubio, who just published his graphic novel, Monet, Nomad of Light and the novel, Zingara: Searching for Jim Morrison. "Saving the Cat! principles are for writing good stories, period, no matter what."

Save the Cat!® books and software can be purchased from the Save the Cat Store, The Writers Store, Amazon, iPhone App Store and retail outlets in North America and Europe and are available in print, Kindle and Audible. Discounts available for books with software purchase.

In the past year, SavetheCat.com has had over 1 million page views and thousands of books have been sold. The first book, Save the Cat! The Last Book on Screenwriting You’ll Ever Need has stayed #1 on Amazon in the screenwriting category, 12 years after its publication.

Save the Cat! methodology is the basis of screenwriting classes at universities and high schools in the U.S., Canada and elsewhere. New platforms, apps and books are expected in the coming years that will provide fresh learning opportunities for the creative community.

Save the Cat screenwriting workshops are held monthly in Los Angeles and in numerous other cities. Script consultations by arrangement.

About Blake Snyder Enterprises, LLC:
Founded in 2005, Los Angeles-based Blake Snyder Enterprises, LLC has become a million dollar franchise with a focus on the entertainment, educational and writing marketplace. The company, led by Snyder’s longtime business partner B.J. Markel, established a development partnership with Final Draft™ in 2008 because of Save the Cat’s software's ability to import Final Draft’s file format for seamless transition from writing to outlining and/or storyboarding.

Save the Cat!® Book Titles:

© Estate of Blake Snyder 2017 All Rights Reserved.
All product and company names mentioned herein may be the trademarks of their respective owners.

Salva Rubio, Writer, Save the Cat! Goes to the IndiesSalva Rubio