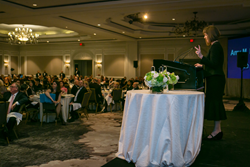 “In the face of possible drastic federal cuts to research and affordable care, we continue our legacy of successful advocacy for women’s health." - Dr. Amy M. Miller, SWHR president and CEO

The Society for Women’s Health Research (SWHR®) hosted its 27th annual awards dinner on March 22 at the Ritz-Carlton in Washington, DC, where nearly 400 guests gathered to celebrate advances in women’s health and honor three individuals with the Women’s Health Visionary Award:

Senator Susan Collins, Senior Senator from Maine, ranks nineteenth in Senate seniority and is the most senior Republican woman.

"We were pleased to honor Myrna Blyth, Senator Susan Collins, and Dr. Mary Lake Polan. Each have advocated for women’s health in their respective diverse fields of work for many years,” said Dr. Amy M. Miller, SWHR president and CEO. “Through education, research, or innovation, their contributions have inspired women to be advocates for their own health.”

Award-winning journalist Leon Harris, who is best known for anchoring newscasts for ABC7/WJLA-TV in Washington, DC emceed the event. Harris discussed his own experience in overcoming pancreatitis, the importance of health awareness and education, and introduced guest speakers and awardees throughout the evening.

A special guest appearance was made by Dan Rather, former CBS Evening News anchor, and now managing editor and anchor of the television news magazine Dan Rather Reports, who presented the award to longtime friend Dr. Polan. In her acceptance speech, she spoke about her support of SWHR.

“Working with the organization over many years has been a wonderful experience, promoting this movement for women’s health not only in the US, but overseas as well,” said Dr. Polan.

Following the awards presentation, Dr. Miller concluded with remarks on the importance of SWHR’s mission and what the organization plans to accomplish in the future. “In the face of possible drastic federal cuts to research and affordable care, we continue our legacy of successful advocacy for women’s health,” said Dr. Miller.

In addition to the gala dinner, SWHR also hosted its second annual gala symposium earlier in the day. The symposium featured a keynote discussion on research gaps in underrepresented diseases in women and minority ethnic groups. Notable speakers included Linda Goler Blount, MPH, President and Chief Executive Officer of the Black Women’s Health Imperative; Marsha Henderson, MCRP, Assistant Commissioner for Women’s Health at the US Food and Drug Administration; Cynthia Hess, PhD, and Associate Director of Research at the Institute for Women’s Policy Research; and Andrew Sperling, JD, Director of Federal Legislative Advocacy at the National Alliance on Mental Illness.

SWHR expresses gratitude to all who supported and attended the event, including our generous Award Benefactor sponsors AARP, Hearst, and also our Leadership sponsors Amgen, Astellas, Celgene, PhRMA, Genentech, and Roche.

Proceeds from the event will benefit SWHR’s science, advocacy, and educational programs, which ensure that women’s health remains a national priority.

The Society for Women’s Health Research (SWHR®) is a national non-profit based in Washington DC. A thought-leader in promoting research on biological differences in disease, SWHR is dedicated to advancing women’s health through science, advocacy, and education. Founded in 1990 by a group of physicians, medical researchers and health advocates, SWHR aims to bring attention to the variety of diseases and conditions that disproportionately or predominately affect women.